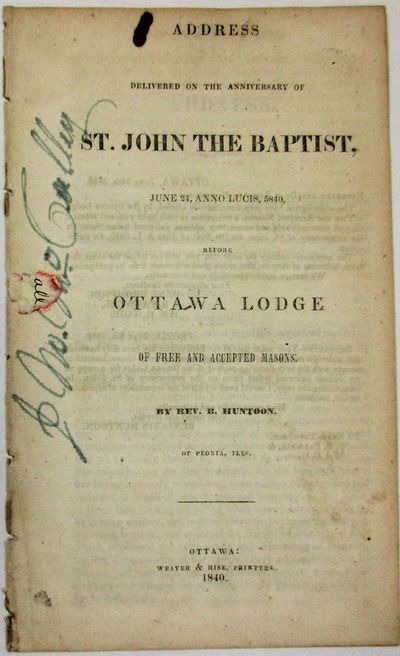 by Huntoon, Rev. Benjamin
Ottawa [Illinois]: Weaver & Hise, Printers, 1840. 12mo, 16pp, stitched and disbound, lightly foxed. Contemporary signature in inner margin of title page. Good+. Reverend Huntoon discourses on the ancient roots, the democratic character, the morality and overall greatness of Freemasonry. The printers, George Weaver and John Hise, were the only game in town for Ottawa. They published "the Illinois Free Trader, a Democratic paper published in Ottawa beginning in 1840." Byrd 497. The first Ottawa imprint that Byrd records [Byrd 497], also 1840, is the Illinois River Baptist Association's convention, which occurred in September 1840. The resolution to publish Huntoon's speech and Huntoon's acceptance are dated June 24 and July 6, 1840, respectively. So Huntoon's speech was probably printed first. This pamphlet is rare, owned, evidently, only by AAS. Sabin lists several pamphlets by Huntoon, all on the subject of Freemasonry and all delivered in Massachusetts or Maine. Although NUC lists a number of his publications, it does not record this one. Not in Byrd, Sabin, American Imprints, Eberstadt, Soliday, Decker, NUC. OCLC 81052667 [1- AAS] as of March 2019. (Inventory #: 15425)
$450.00 add to cart or Buy Direct from
David M. Lesser, Fine Antiquarian
Share this item
David M. Lesser, Fine Antiquarian Books LLC
Offered by