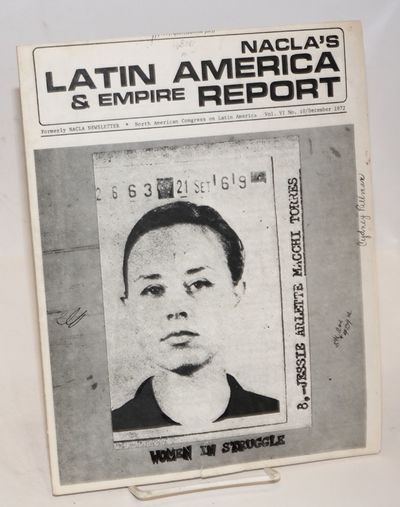 New York: North American Congress on Latin America, 1972. 32p, wraps. Women in the Struggle issue, photos, illustrations, tables, minor ink marks on cover and several pages inside, small tear to first three pages, small tear due to label removal on rear cover, some yellowing. The information source for the Left in Latin America. Vol. VI, Number 10, December 1972. The NACLA Newsletter, which became the Latin America & Empire Report in the early 1970s, was the primary source for Left-wing reportage on events and institutions affecting the people of Latin America, occasionally expanding coverage to the Mid-East, Southeast Asia and,of course, the Empire. Each issue, published monthly, is filled with lists,statistics, reading lists, tables, maps and other extremely useful information on the activities of the CIA, US and multinational corporations, banking institutions and military-police tactics throughout South and Central Americas, the islands and Mexico. (Inventory #: 168081)
$10.00 add to cart or Buy Direct from Bolerium Books
Share this item