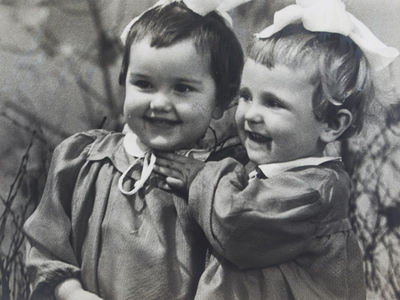 by n/a
Moscow: NP, 1947. First edition. Hardcover. Oblong folio. Unpaginated. Bolted green cloth with blind-stamped outline of the committee's flag and gold lettering on front cover. Age wear with minor staining and scuffing to binding. Five-inch split along bottom edge of front cover. Expertly reinforced with gray binders tape along gutter at front- and rear endpaper. Profusely illustrated with 83 original b/w and sepia-tone photographs mounted on heavy card stock. Photos show children at play, nurses with newborns, mothers with their kids at home, etc. Usual age toning to card stock. Text in Russian. Binding in good-, interior in overall very good condition. Rare. Originally created in 1941 as an antifascist committee, at the time of this publication it simply became a women's organization. Its main purpose was to convince foreign women's delegations of the high economic and political status of women in Russia. Representatives stressed the fact that the vast majority of lawyers, doctors and teachers were women, but failed to point out the miserly salaries and low prestige of those professions within the economic hierarchy in the Soviet Union. This hypocrisy turned many women against the organization. (Inventory #: 19876)
$6500.00 add to cart or Buy Direct from
Eric Chaim Kline Bookseller
Share this item