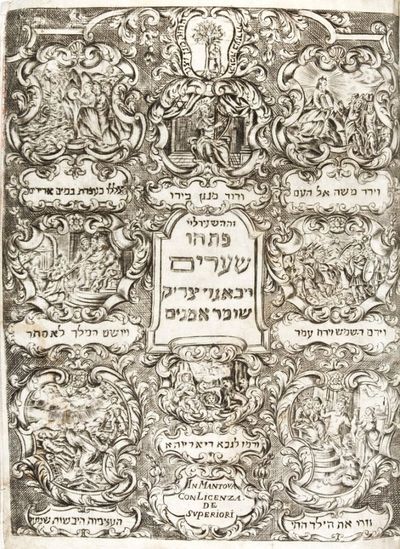 by Norzi, Jedidiah Solomon Raphael ben Abraham; Raphael Hayyim Basila; Yehoshu'a ben Mikha'el Mi-Sitsi; Raphael Hayyim di Italia
Mantua: Refa'el Hayim Me-Italya Ha-Rofe, 1744. First edition. Hardcover. g. Complete 2 volume set. 4to. First volume (4), 142 leaves, 88 leaves. Second volume 98 leaves, (1) leaf, 51 leaves, (6) leaves. Half brown leather over paper boards with raised bands. Blue and red speckled edges. Pair of illustrated and full title pages. The illustrated title page contains the heading: "open the gates so that the righteous converts, the protectors of the faith, shall come." The illustrations are of biblical scenes, Moses and the tablets, David and his harp, Miriam leading the women at the Red Sea, Queen Esther and King Ahasuerus, Ezekiel bringing the dried bones to life, Solomon with the disputed baby and Joshua stopping the sun. This illustrated title-page appears before the Pentateuch, Early Prophets, Later Prophets and Hagiography sections. The full title-page has red and black letters. There are decorated initials and tail pieces at the beginnings and endings of sections. The book contains the Old Testament text in Hebrew accompanied by the Hebrew commentary Minhat Shai (Goder Perez) by the 17th century scholar Rabbi Jedidiah Norzi and edited by Rabbi Raphael Hayyim Basila. Prefaces by Basila and the printer Doctor Raphael Hayyim di Italia. Letter of approbation by the Mantua rabbis R. Menahem Samson b. Solomon Basila and R. Jacob Mendola. There is a short poem at the end by printer, comparing the 24 books of the Old Testament to bread and wine. There is also a pair of short discourses on Hebrew grammar by Norzi. This work is the product of early modern rabbinic efforts to reach out to Mantua's converso immigrant population. This can be seen in the heading praising "converts." One assumes this refers to those conversos, who were reared as Catholics, but came to Judaism as adults. The poem's references to bread and wine can be read as a polemic against the Eucharist, which the converso reader was giving up for the "true source of life," the Old Testament. Text is in Hebrew. Cover shows wear, particularly at the corners and edges. Corners of front free endpaper torn. Rippling and water staining to endpapers. Second volume spine cover is split, but still intact. Overall in good condition. Darlow and Moule #5150. (Inventory #: 18872)
$2950.00 add to cart or Buy Direct from
Eric Chaim Kline Bookseller
Share this item