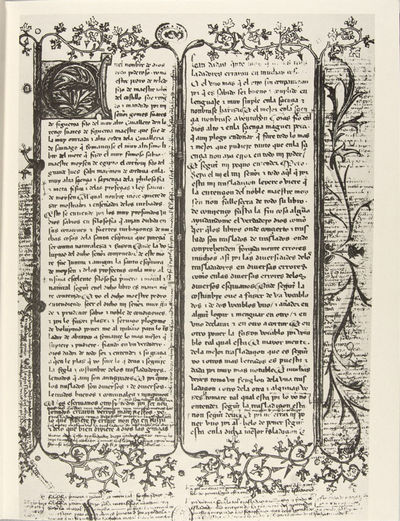 by Maimonides; Pedro de Toledo (trans.); Moshe Lazar (ed.); Robert Dilligan (ed.)
Culver City, CA: Labyrinthos, 1989. Limited Edition. Hardcover. vg. 1/300. 4to. XVIII. [2], 370pp. Original red-brick smyth-sewn clothbound with silver illustration on front cover and silver lettering on spine. Frontispiece. Second volume in the "Sephardic Classical Library" series. The only extant 15th-century Spanish translation of Maimonides' Guide for the Perplexed, preserved in a single manuscript at the Biblioteca Nacional in Madrid, of which only very small fragments have been published during the last hundred years. Written originally by Maimonides in Judeo-Arabic, this monumental philosophical and exegetical treatise was translated into Spanish by the Jewish converso Pedro de Toledo, in the first decades of the 15th century from two different surviving Hebrew translations (by Samuel Ibn Tibbon and Yehuda Al-Harizi), while possibly also consulting the Judeo-Arabic and other texts. It was the first translation of Maimonides' work into a vernacular language and possibly the most extensive philosophical text in Spanish prose. The first 20 folios of the manuscript are densely covered with glosses of the translator and critical comments written in a mid-15th century hand by an anonymous Jewish reader. Since 1948, Americo Castro strongly advocated the need to make available the entire text, "to see how one understood and interpreted a complex book of philosophical questions at a time when nothing comparable in philosophical density had ever been attempted in the Castillan language." This work offers for the first time a complete transcription of the entire text and its glosses. Includes a selected bibliography. Preface in English; text in Spanish. Binding and interior in fine condition. R. Moses Maimonides (Rambam) was a 12th century Jewish philosopher and halachic legal scholar. A highly controversial figure, both during his lifetime and after his death, but generally acknowledged as the preeminent Jewish thinker of the Middle Ages. He was born in Córdoba, Spain but fled as a child due to Almohad persecution of Jews. He eventually settled in Egypt where he served as a rabbi, physician and philosopher. His fourteen-volume Mishneh Torah, his only work not in Arabic, still carries canonical authority, particularly within the Yemenite Jewish community, as the codification of Talmudic law. His other work includes a commentary on the Mishnah entitled Kitab al-Siraj, Kitab al-Fara'I, a book on precepts, and the philosophical work Dalalat al-Ha'irin, known in Hebrew as the Moreh Nevukhim, The Guide to the Perplexed. The major premise is an attempted philosophical/theological reconciliation of the Hebrew Bible and Greek knowledge and explaining away anthropomorphic and antropopathic terms in the Bible. This work came to play a central role in all subsequent major controversies over philosophy within the Jewish community during the Middle Ages. (Inventory #: 26649)
$95.00 add to cart or Buy Direct from
Eric Chaim Kline Bookseller
Share this item