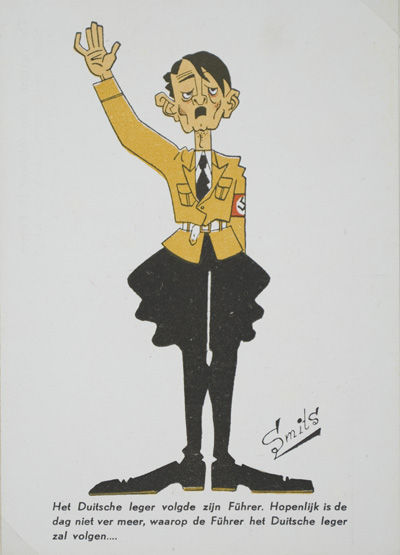 by Smits
near fine. Two Series of anti-Nazi postcard caricatures printed in color (all 5,5" x 3,5" postcatds) by Dutch artist Smits; mounted with photo corners to four leaves of 12"x 8" blank white paper: 1) 5 uncaptioned caricatures showing Winston Churchill and Franklin D. Roosevelt in a rather jovial mood, Joseph Stalin being sceptical, Benito Mussolini in lockstep, and Hitler in a rather dreary mood. 2) 10 caricatures with Dutch captions, all with facsimile signatures by Smits, one depicting Julius Streicher, two show Joseph Goebbels giving speeches, one a meeting of Hitler, Goebbels and Göring, another Goebbels and Hitler, three of them Hitler adminestering variant greetings, and two depicting prisioners, one Nazi soldiers with ape-like features, one still carrying the sign reading "one people, one homeland," and the other showing a grim looking Hitler with Göring and a third Nazi at his side. (Inventory #: 18159)
$750.00 add to cart or Buy Direct from
Eric Chaim Kline Bookseller
Share this item