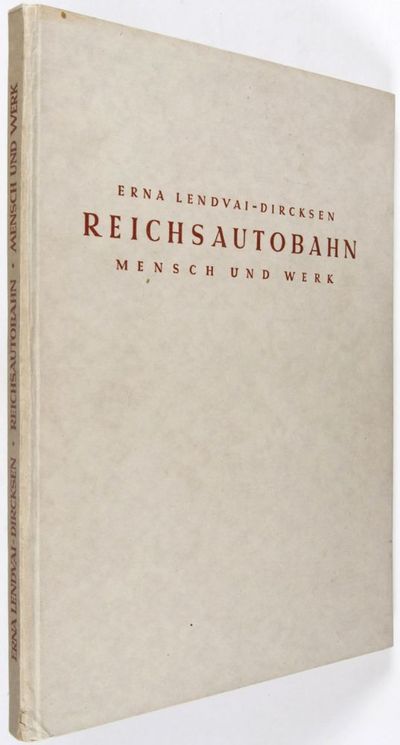 by Lendvai-Dircksen, Erna
Bayreuth: Bayreuth Gauverlag, 1942. Second edition (Zweite Auflage, 11. bis 20. Tausend). Hardcover. 8vo. Unpaginated [108pp]. Quarter cloth over brown paper-covered boards, title in white on spine. Book housed in custom-made modern gray cloth clamshell box. Profusely illustrated with 99 b/w reproductions of photographs. Majority of images show portraits of construction workers, others depict the building of the Autobahn, bridges, as well as landscapes surrounding the Autobahn. As early as 1930, German photographer Erna Lendvai-Dircksen's work attracted the attention of the National Socialists, who approved of her images depicting the perfect Aryan. For this work she received state commissions from the Reich. The photographer was also an active member the Nazi party. Foreword by Reichsminister Dr.-Ing. Fritz Todt. With comments and poems throughout by Emil Maier-Dorn. Text in German. Very minor bumping on tail of spine. Tight copy in very good to near fine condition. (Inventory #: 30031)
$325.00 add to cart or Buy Direct from
Eric Chaim Kline Bookseller
Share this item