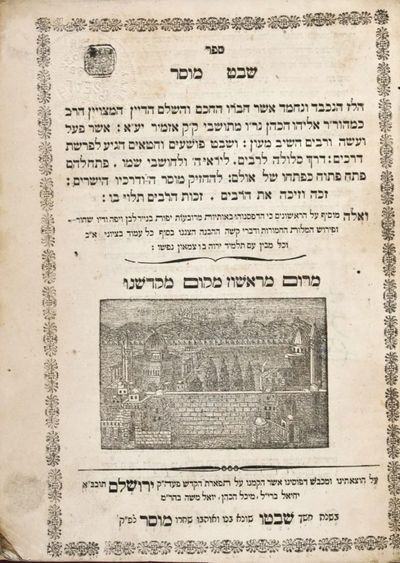 by Ha-Kohen of Izmir, Elijah
Jerusalem: Yehi'el Bril, Mikhl Ha-Kohen, Yo'el Moseh Beha-Ram, 1863. Early Jerusalem imprint. Hardcover. g. 8vo. 130 leaves. Modern red cloth binding with gold lettering on spine. Illustrated half title depicting an engraving of the tomb of Zechariah ben Jehoiada. Illustrated title featuring an engraving of the Temple Mount. Reverse sides of both title-pages contain introductions, one by the printer and the other by the author. Title-page for the second part of the book contains an illustration of a heavenly printing press. Hebrew translation of the popular 18th century work on Jewish ethics first published in Constantinople in 1712. Pages are laid out in double columns. Engraving of the tomb of the patriarchs in the rear. Text in Hebrew. Half title page and 1 of the interior leaves repaired with non abrasive tape. Signature on reverse side of full title-page. Blind-stamp from institution. Several leaves creased and stained. Overall in good condition. (Inventory #: 31824)
$1250.00 add to cart or Buy Direct from
Eric Chaim Kline Bookseller
Share this item