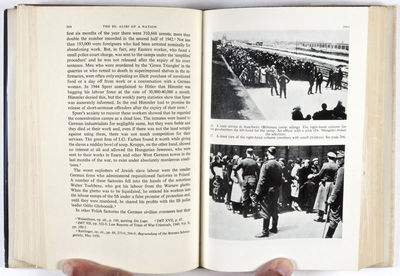 by Reitlinger, Gerald
Melbourne; London; Toronto: Heinemann, 1957. Second revised. Hardcover. vg. Large octavo. XI, [5], 502pp. Original printed dust-jacket over cloth with silver lettering on spine. Frontispiece portrait of Heinrich Himmler. Publisher's logo on title page. In this remarkable work, Reitlinger explores the complex social machinery that allowed the SS to operate-the administration and internal rivalries, the SS field divisions, German military intelligence, and the organization of the concentration and death camps. He shows how the SS was embedded in the basic government of the country during those years and how its members were not so much lunatic killers as loyal citizens doing the bidding of a country that had gone insane. Powerful, objective, and based on original German documents and interviews-including information from Himmler's statistician-this book rejects the SS as an alibi for a nation's responsibility in the most far-reaching racial massacre in history. This work is illustrated with 3 maps and numerous b/w photographic reproductions. Minor creasing along edges of dust-jacket. Price clipped. Dust-jacket in overall good to good+, binding and interior in very good condition. (Inventory #: 32884)
$75.00 add to cart or Buy Direct from
Eric Chaim Kline Bookseller
Share this item