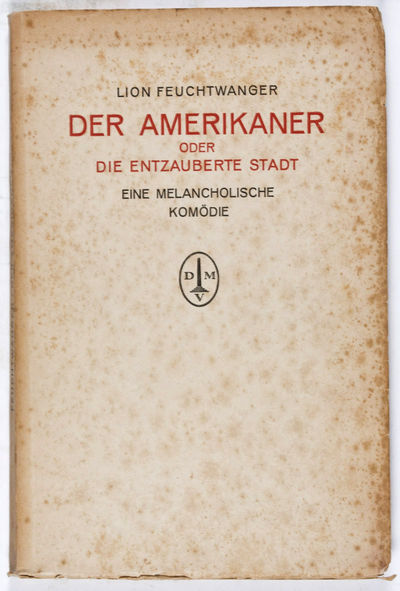 by Feuchtwanger, Lion
München: Dreimasken Verlag, 1921. First edition. Softcover. g. Octavo. 128,[7]pp. Original wraps with red and black lettering cover, black lettering on spine. First edition of Feuchtwanger's 'melancholic comedy' in four acts. In his play, Feuchtwanger measures reality with his humanistic ideals, interpreting historical events of the time as a contradiction to spiritual development as a whole. The story takes place in southern Italy in the castle and ruins of Cortevecchia (antique Thyrsopolis) in the year 1912/13. Lion Feuchtwanger (1884-1958) was one of the most read author's of exile literature. While being abroad on a lecturing tour in England and the United States in 1933, he was unable to return to Germany due to the takeover by the Nazi's earlier that year. He lived in Exile in France until the German invasion at which time he fled to the United States. Text in German. Heavy foxing on wraps, edges of wraps creased and partly chipped. Top corner bumped affecting pages throughout. Age toning to outer edges of interior leaves. Wraps in fair, interior in overall good to very good condition. Important work by one of the main figures of German "Exilliteratur." (Inventory #: 29091)
$250.00 add to cart or Buy Direct from
Eric Chaim Kline Bookseller
Share this item