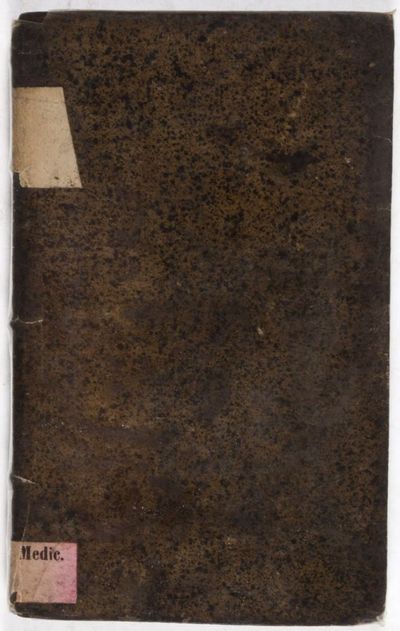 by Mead, Richardo (Richard Mead)
Lausannae (Lausanne): Marc Michael Bousquet & Chapuis, 1760. Later edition. Hardcover. g- to g. 12mo. XV, [1], 75, [5]pp. Original decorative paper covered boards. Decorative headpieces and initials. Commentary on the most remarkable diseases, mentioned in the Holy Scriptures' in which the author made use of Joseph Mede's "Doctrine of Demons" and Isaac Newton's "Chronology" to argue that pagan ideas regarding demons had entered Christianity. Previous owner's armorial bookplate (Frederick Augustus, Prince of Brunswick-Wolfenbüttel-Oels*). Spine partly chipped and taped. Pages somewhat rippled, and darkened along edges. Upper corner of very last pages creased. Text in Latin. Binding and interior in overall good- to good condition. *Frederick Augustus of Braunschweig-Wolfenbüttel (1740-1805) was a German nobleman and Prussian general. A prince of Braunschweig-Wolfenbüttel and thus one of the Dukes of Brunswick-Lüneburg, in 1792 he was granted the Duchy of Oels and the Duchy of Bernstadt and thus also became the ruling duke of these duchies.One of thirteen children of Charles I, Duke of Brunswick-Wolfenbüttel and his wife Princess Philippine Charlotte of Prussia, in 1754 he became a captain in the Brunswick-Wolfenbüttel Lifeguard regiment and on 28 April 1761 became an oberst and commander of the Zastrow Foot Regiment. During the Seven Years' War he fought at Vellinghausen, Wilhelmsthal, Melsungen, Homburg and Fritzlar. On 17 August 1761 he was made a major general and in October that year fought at Ölper and thus in the liberation of the city of Brunswick from its last siege. In 1763 Frederick Augustus became a lieutenant general and commander of the Tettenborn Foot Regiment (later 19th Regiment) in Prussian service, becoming a favourite of his uncle Frederick II of Prussia and from then on always accompanying him on manoeuvres. He was also made governor of the fortress at Küstrin. On 1 October 1763 he was made a knight of the Order of the Black Eagle. On 20 December 1764 he was made an honorary member of the Prussian Academy of Sciences. On 6 September 1768 he married Princess Friederike Sophie Charlotte Auguste of Württemberg-Oels (1751-1789), daughter of Charles Christian Erdmann, Duke of Württemberg-Oels (1716-1792), though the marriage remained childless right up to her death in 1789. In 1774 he was appointed provost of Brandenburg. On 21 May 1787 he was made a General of Infantry and on 13 December 1792 he was made duke of Oels in Lower Silesia. On 28 December that year he was put in command of a Prussian army corps intended to be deployed in Westphalia, but for health reasons he first delegated the command to lieutenant general Knobelsdorff on 26 March 1793 and then on 20 March 1794 was finally dismissed. He then retired to his Schloss Sibyllenort in Lower Silesia to translate French plays and to literary works. He died in October 1805 while visiting his sister Anna Amalia in Eisenach, and was buried in Weimar. The duchy of Oels passed to his nephew Frederick William, Duke of Brunswick-Wolfenbüttel, the so-called 'Black Duke'. (Inventory #: 31790)
$275.00 add to cart or Buy Direct from
Eric Chaim Kline Bookseller
Share this item