Twenty-Seven Original Photographs by Fred R. Dapprich of Santa Barbara Residences [ALL WITH ORIGINAL SIGNATURE BY PHOTOGRAPHER] with Letter from Frank A. Hellenthal regarding addition to E. D. Griffith's home (2 Portfolios) 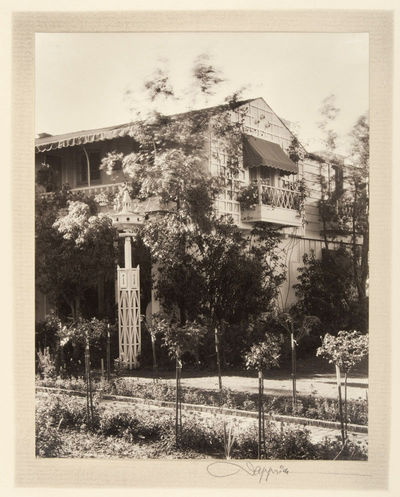 by Dapprich, Fred R. (photogr.)
NP, ND. Hardcover. Portfolio 1) Ten fiber-based silver prints & four glossy silver prints resting in half-cloth over color decorative paper-covered portfolio with folding flaps. Business card of Dapprich pasted on front and rear of portfolio cover as well as on verso of the photographs. Ten photographic prints of "The Cudahy house, Montecito, California, George Washington Smith, Architect." Measuring 8" x 10" to slightly smaller size of 7 1/2" x 9 3/4" all are signed in pencil on the mount by Dapprich. Three exteriors of the residence with an impressive landscape and seven interiors of a variety of rooms, which were furnished by interior designer Miss Gheen of New York. Owned by sisters Mary and Clara Cudahy, the Tudor-style home was designed in 1929 and is Smith's best example of a large house that nonetheless creates a cozy feeling. The ten matte-surface prints were originally tipped-in on card stock; only three remain attached (seven loose but complete with signed card stock). Eight numbered out of sequence. WITH:An additional four glossy 8" x 10" silver-print photographs of interiors from an unidentified house (possibly the Cudahy House), all signed on lower margin in pencil by Dapprich, with his stamp on verso. WITH:Carbon copy of a letter from architect Frank A. Hellenthal to Mr. and Mrs. E. D. Griffith, regarding additions to their Three Arches, California residence. On parchment paper (7" x 11") in carbon copy typescript on Hellenthal's letterhead, dated April 14, 1934 with "COPY" in thin black letters stamped across text. In it, Hellenthal proposes a fee for additions as per plans and specifications prepared by Horning and Steffgnen and also lists eight alternative items and their net costs and terms. [Note: There is an historic house at 40 N. La Senda in Three Arch Bay (the historic name of which is Three Arches), in South Laguna, California, which was built by Casey Adamson in 1927 for Edward H. "Ned" Griffith, a movie producer for MGM and 20th Century Fox, and his wife America. It is described in 1981 as "the architectural and historical focus of the neighborhood" in a Historic Resources Inventory by the State of California. Possibly this is the house discussed in Hellenthal's letter, with what might be a typo in Griffith's initials ("D" instead of "H"). Leaf slightly creased. Some age wear, scuffing and rubbing on portfolio. Portfolio 2) Thirteen fiber-based silver print photographs protected by textured tissue-guards bound with string tie and resting in half faux-leather over patterned color cloth portfolio. Deckled fore-page edges. Photographs mounted on card stock, all signed by Dapprich on mount, measuring 7 1/2" x 9 1/2". Five photographs show the exterior of an unidentified California residence (mailbox reads "125"), eight are of the interior, depicting dining rooms & fireplaces, a staircase, and two sitting rooms. Business card of Dapprich pasted on inside of portfolio cover. Minor rubbing to head and tail of portfolio spine. One tissue-guard creased. Portfolio in very good, photographs in fine condition. Los Angeles based Fred R. Dapprich billed himself as a Pictorial Photographer who specialized in architectural, advertising and portrait photography. He was associated with other Los Angeles art photographers such as Milton Inman and is known to have photographed the Louise and Walter Arensberg foyer with sculptures by Brancusi, the dancer Zora, and for the Automobile Club of Southern California. "Fred Dapprich was a very well known man. He worked with Rudolf M. Schindler and some of the early architects. And Harwell H. Harris, too, for that matter -- because I remember seeing his name when I was first beginning association with these architects...the architectural photographers of that period were mostly specialists in interiors - and exteriors, of course, too - but they were good. They were the forerunners of some of the work that was done in later years." (Julius Shulman interview, 1990 Jan. 12 - Feb. 3, Archives of American Art, Smithsonian Institution). (Inventory #: 28088)
$2750.00 add to cart or Buy Direct from
Eric Chaim Kline Bookseller
Share this item