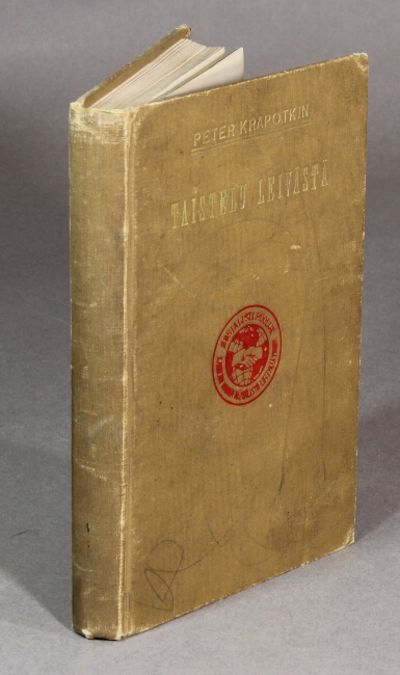 by Krapotkin, Peter [i.e. Petr Alekseevic Kropotkin]
Hancock, Mich: Työmiehen Kustannusyhtiö Kirjapaino, n.d., 1906. 8vo, pp. 251; some infantile pencil scribbles to the front free endpaper, on pp. 114-15, and to the cloth on the rear board (now mostly erased); original brown cloth stamped in gilt and red on the upper cover; cloth somewhat rubbed and a bit bumped; a good, sound copy, or better. My colleague Garrett Scott writes: "A nice example of the dissemination of radical material among the immigrant workers of copper country, from the anarchist communist Kropotkin, a series of articles first published in book form by Reclus in 1892 as La Conquête du Pain. The publishing house Työmiehen Kustannusyhtiö had come to Hancock in 1904 and remained active there until it relocated in 1914 (after the copper strikes) to Superior, Wisconsin. OCLC notes a single holding of a Tempere (Finland) edition of 1906 translated by Kaapo Murros, the Finnish journalist and socialist politician who had been a day laborer and occasional editor and translator in American between 1902 and 1906 (at least three of his titles appeared with Hancock imprints between 1902 and 1904, two of them under a version of the name he was born with, David Gabriel Murros); he returned to Finland in 1906. It seems fairly certain that this is the Murros translation (one hates to think of competing contemporary Finnish translators at work on Kropotkin) though whether the Tempere edition was taken from this (or vice versa) remains unclear." (Inventory #: 36078)
$258.75 add to cart or Buy Direct from
Rulon-Miller Books
Share this item

Remarks on the pronunciation of the Greek language. Occasioned by a late essay on the same subject by John Pickering

A brief survey of the great extent and evil tendencies of the lottery system, as existing in the United States ... Published by order of a meeting of citizens of Philadelphia, favourable to the entire abolition of lotteries