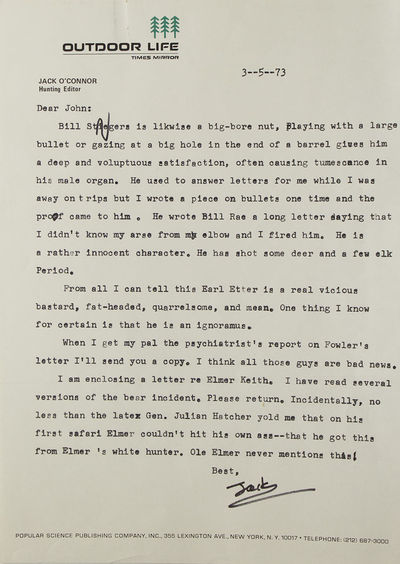 by O'Connor, Jack (1902-1978)
vp, 1973. 4to. Fine, with corrections, with envelopes on occasion. 4to. Jack O'Connor served as the Shooting Editor of Outdoor Life for 31 years and is considered one of the great hunting and gun writers of the twentieth century. Opinionated and witty, his personality shines through in this collection of letters. On animal classification: "Between us girls, I think the American taxonomists have gone hog wild on sub-species. I think the British are much smarter...They say that all caribou are one species and they have damn few sub-species." On an acquaintances and associates: "As I remember him, he was a little guy, dark, and strictly a bastard"; "Bill Steigers is likewise a big-bore nut, playing with a large bullet or gazing at a big hole in the end of a barrel gives him a deep and voluptuous satisfaction, often causing tumescence in his male organ"; "From all I can tell this Earl Etter is a real vicious bastard, fat-headed, quarrelsome, and mean. One thing I know for certain is that he is an ignoramus"; "This Herter is quite a guy. I think he's at least half nuts, maybe more. He has more misinformation in his books than the Encyclopedia Britannica has information." On the Hotel Edison: "I have never set foot in the Hotel Edison, but I have heard it was a dump." On a failed bear-hunting expedition: "Our companions were two young Englishmen...Both had very attractive wives...We really had a grand time, but those guys were the spookiest bear hunters I have ever seen in my life. They missed two good trophy grizzlies--one at 30 yards and one at 110 yards--and a very good black bear at about 50 yards. In all cases the bears were standing." On the Civil War: "I am a Civil War buff...One of these days I am going to do an article that will make a lot of Southerners scream like catamounts. The thesis of the piece will be that Lee was an overrated general who made his reputation on a bunch of fiddle-fotted [sic] and gutless Union generals..." On family histories: "My uncle Bill O'Connor got a girl knocked up when he was a senior in law school in California and took it on the lam...My mothers' people were Kentuckians but they were not planters--just prosperous farmers." On criticism: "Bill Rae has got hundreds of these nut letters...I always tell these creeps that if they don't like to read stories about killing birds and animals and catching fish they should read something besides Outdoor Life, Field & Stream, and Sports Afield because these magazines are about shooting animals and birds and catching fish" Ellen Enzler Herring, Jack O'Connor: Catalogue of Letters 5, 6, 34, 71, 86, 111, 138, 142, 148, 176, 184, 200, 252, 261 & 263 (Inventory #: 238087)
$1,950.00 add to cart or Buy Direct from
James Cummins Bookseller
Share this item
James Cummins Bookseller Inc.
Offered by

Secret Despatches from Arabia by T. E. Lawrence. Published by Permission of the Foreign Office. Foreword by A. W. Lawrence

London : Golden Cockerel Press , 1939
(click for more details about Secret Despatches from Arabia by T. E. Lawrence. Published by Permission of the Foreign Office. Foreword by A. W. Lawrence)

The Art of Angling, Rock and Sea Fishing: with the Natural History of River, Pond & Sea Fish

London : Printed by and for John Watts at the Printing-Office in Wild-Court, near Lincoln's-Inn Fields , 1740
(click for more details about The Art of Angling, Rock and Sea Fishing: with the Natural History of River, Pond & Sea Fish)
View all from this seller>