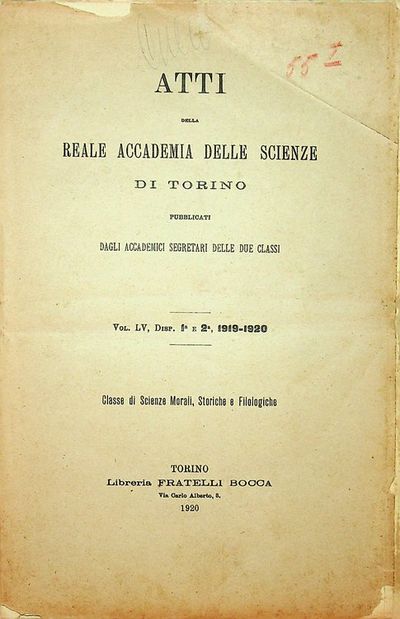 by Betti, Emilio ; Boffito, G.
Torino, Italy: Libreria Fratelli Bocca, 1920. First Edition. Wraps. Very Good. First Edition. xliv, 43, [1-blank] pages. 8vo. Tan printed wrappers. Unopened, untrimmed copy. Red and black penciled notation on front wrapper. Front wrapper corner creased and approaching detached. Minor chipping. Scarce in the original wrappers. Text in Italian. Wraps. "Proceedings of the Royal Academy of Sciences of Turin published by the academic secretaries of the two classes. Vol LV, Parts 1st and 2nd 1919-1920, Class of Moral, Historical and Philological Sciences" (from the Italian) Includes articles by Emilio Betti (La condictio dei fructus contro il possessore di mala fede) and G. Boffito (Due Passi dal Cardano concernenti Leonardo da Vinci e L'aviazione). "Emilio Betti (Camerino, 20 August 1890 - Camorciano di Camerino, 11 August 1968) was an Italian jurist, Roman Law scholar, philosopher and theologian. He is best known for his contributions to hermeneutics, part of a broad interest in interpretation. As a legal theorist, Betti is close to interpretivism. Betti's intellectual support of fascism between the end of World War I and the beginning of the 1920s led him to be arrested in 1944, in Camerino. Betti remained in prison for about a month, as decided by the Comitato di Liberazione Nazionale. In August 1945, Betti was presented to court and absolved of every accusation." (wiki) Giuseppe Boffito was a historian of Italian Science. (Inventory #: 15324)
$33.00 add to cart or Buy Direct from Kuenzig Books
Share this item

Photography in the studio and in the field...A practical manual designed as a companion alike to the professional and the amateur photographer

New York : E. & H. T. Anthony & Co , 1887
(click for more details about Photography in the studio and in the field...A practical manual designed as a companion alike to the professional and the amateur photographer)