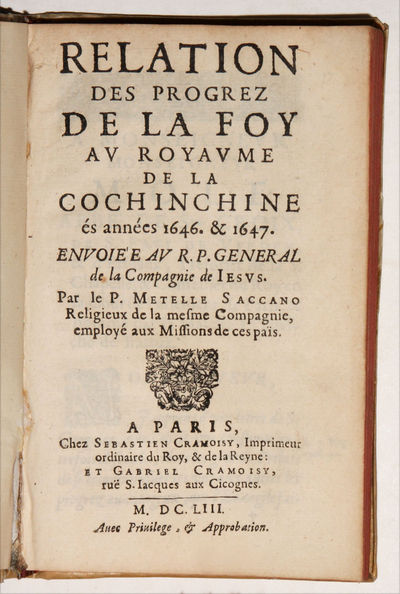 by SACCANO, Metello
Paris: Sebastien Cramoisy and Gabriel Cramoisy, 1653. Hardcover. Very Good. 8vo - over 7¾ - 9¾" tall. [1]ff, (10), 139 pp, (1). Bound in old vellum, internally perfectly clean and fresh, an excellent copy. Rare first and only edition of two Jesuit letters from the province of Cochin-China, written in the years immediately following the expulsion of the Jesuit's most powerful Southeast Asian operative, Alexander de Rhodes. Alexander Rhodes, 'Apostle of Vietnam' (Lach and Van Kley III: 1266) unfortunately attracted the enmity of the King of Cochin-China and was eventually expelled in 1645. He was replaced by Metello Saccano and Carlo della Rocca, who apparently managed to win the king over "with a gift of exquisite pearls". A Sicilian, Saccano had learned the Annamese language from Rhodes himself before replacing the legendary Jesuit father. The mission in Cochin-China appears to have suffered much hardship under the capricious anti-Christianism of King Nyguyen Phuc-Lan (d. 1648). The letters here cover the years 1646 and 1647. One of the most significant events of 1646 for Saccano was the gaining of permission for Jesuits and their catechists to reside in Cochin-China at all; this, however, was preceeded by a period of renewed persecution, the martyrdom of two converts, etc. Saccano also records that Rhodes attempted to return to his mission in Cochin-China that year but was disuaded by his fellows - "le Roy estant encore tout boüillant de colere contre nous, & contre tous les Chrestiens". However, two other missionaries did suceed in arriving from Macao. All in all Saccano delivers exactly what his home readership is expecting - plaintive tales of terrible martydoms, uplifting tales of faith in the face of cruel idolators, and so on. According to his second letter, however, 1647 was a relatively peaceful year, unravaged by the usual warfare with the Tongkingese in the north. Foreign ships mercifully escaped pillaging by the predatory Dutch, and the King was far better behaved than in previous years, ordering only a modest massacre of some 50 of his subjects. Saccano is especially proud of reports he has had detailing the kindness of his converts to Portuguese sailors arriving at port in Cochin-China, and confirms that he has had much success in converting peasants to the true faith, including two 'Bonzes', or Buddhist monks. Several miracles are recorded, including the deliverance of a villager possessed by the Devil. Nevertheless, three Christians are reported to have been martyred. Metello Saccano was later sent to Japan, where he died in 1662. OCLC reports Cornell, the NYPL, Berkeley, Kansas, and the Peabody. * DeBacker-Sommervogel VII: 360; cf also Lach & Van Kley, "The Nyguyen and the Chrsitians", pp 1266-76 in Asia in the Making of Europe, Vol III. (Inventory #: 4980)
$6,500.00 add to cart Available from Martayan Lan
Share this item
Martayan Lan, Inc.
Offered by