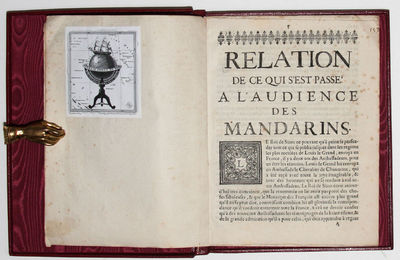 by [SIAMESE AMBASSADORS IN PARIS]
Toulouse: Chez Jean Boude, 1686. Soft cover. Very Good. 4to - over 9¾ - 12" tall. 8 pp. Bound in marbled wrappers and housed in a fine red morocco case. $3850 Extremely rare first and only edition of this detailed popular newsletter concerning the contemporary reception of three Siamese ambassadors in Paris in September of 1686. The report gives a full description of their entrance, their itinerary, and the names and qualities of the individual ambassadors - whose 9-month stay in northern France between 1686 and 1687 must have provoked enormous interest. Providing the reader with some background, the work notes that the King of Siam, having been only recently convinced of the greatness of Louis XIV and the French nation, has decided to send three more mandarins as envoys. "Ces Mandarins sont tres-honnestes, les meilleures gens du monde, doux, civils, & complaisans, de tres-bonne & agreeable humeur .". According to this account, they arrived at Brest on the 18th of June and reached Paris only on the 12th August. On the 'first day of this month of September', the delegation was officially presented to Louis XIV. Its centerpiece was the King of Siam's letter to Louis, written on a blade of gold encased in a golden boëte (bottle?) and poised atop a golden chalice, all of which was carried aloft on a machine by 12 Swiss guards. The ambassadors themselves, it is recorded, took care to cover the machine with their parasols. Upon meeting the king, "ils firent une profonde reverence en leur maniere, se prosterant, & mettant leurs mains sur leur vissage". The gifts presented by the envoys are notable for their overwhelming Japanese provenance (a closed center of trade to the French), and are accompanied here by occasional offhand remarks. Two vases of tombac (a flexible alloy similar to brass) are thought "presque aussi précieux que l'or", and are imputed to be "what the ancients called electrum"; two samurai swords presented by the King of Japan to the King of Siam are accompanied by the remark "they say that those who know how to handle these swords properly can cut a man's body in half; it's this that makes them beyond price"; etc. An antique marble sculpture apparently depicts a Chinese man whom the Siamese call To inghoing; "we belivee that this is the same as he whom we call Confuscius". The writer of the newsletter seems surprisingly well-informed, and is certainly aware of the plans of the official retinue, suggesting a source perhaps close to the court. "They are presently busy seeing the beauties and the riches of the Capital of our Kingdom. Around February after they have had their final royal audience, they will return and recount all that they have seen, and assuredly they will not forget what they have learned, and understood of the suprising reunion of Protestants to the Roman religion, for the King of Siam having proposed Louis le Grand as a model in all things, and desiring to be able to make his entire kingdom French.has demanded that the King send him missionaries, persons experienced in warfare, wise men, and men learned in many arts." Following this account of the ambassadors' visit is a brief 'Description du Royaume de Siam' - with much reference to Arab and Moorish settlements, to the Siamese love of music, to their 'superbly-dressed women', etc. Thanks to royal decree, Siam enjoys public schools in which laws and religion are taught in the vernacular, but the sciences are reserved for a learned tongue. Inspired no doubt by the Chinese rites controversty, the commentator notes that despite their plural deities the Siamese do believe in one Creator of the Earth and the Heavens, and they do maintain that the world will end in fire. The final leaf of the work is occupied with a discussion of the 'names and qualities' of the amabassadors. OCLC records only the copy at Cornell. * OCLC 64004509 (Inventory #: 4982)
$3,850.00 add to cart Available from Martayan Lan
Share this item
Martayan Lan, Inc.
Offered by