The LIFE Of Our LORD 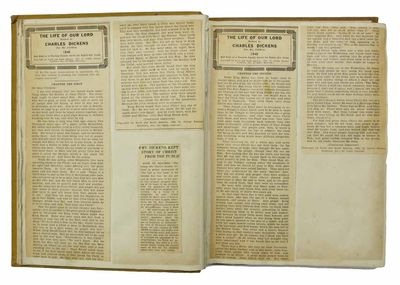 From Smith, "Dickens wrote The Life of Our Lord over a period of four years from 1846 until sometime in 1849. It was written exclusively for his children and not for publication. However, with the detah of Sir Henry Fielding, Dickens' last surviving child, the family sold the world publication rights to Associated Newspapers Limited for Â£40,000 ($210,000), and the work began publication in the Daily Mail on March 5, 1934. It was published simultaneously in nearly two hundred different newspapers in America." (Inventory #: 25524)
$135.00 add to cart or Buy Direct from Tavistock Books
Share this item

New York : Published by Charles Magnus , (n. d.)
(click for more details about MILWAUKEE)
View all from this seller>