CALIFORNIA KING GOLD MINES COMPANY [Booklet Thereon] of Picacho California [with] TYPED LETTER [file copy] from Lewis Kimball to B. A. Colonna, Regarding Said Mine 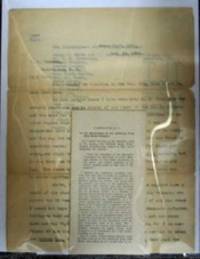 The booklet, authored by Bright, gives a history of the California King Gold Mines Company management, as he knows it, from 1901. Having recently resigned as Director, he wishes to contact all the stockholders [hence Mr Kimball's receipt of same] to inform them, via this booklet, of the company's position, which, he implies was mis-managed.Kimball's letter to Colonna ["a large stockholder"], spurred by this booklet, which he, Kimball, notes as having received "last eve." He goes on to state that, in his estimation, the mine management was "steal[ing] from the start, and not content to steal the Golden Egg [underscored], they are trying to steal the Goose [underscored] that lays the Golden Eggs." Kimball concludes with a list of company stockholders of which he knows, saying he has "disposed of all the stock I owned but hope to see the scheme to rob the stockholders defeated." An interesting, and rare, glimpse into the California Mining industry during the turn of the [last] century. (Inventory #: 26676)
$175.00 add to cart or Buy Direct from Tavistock Books
Share this item