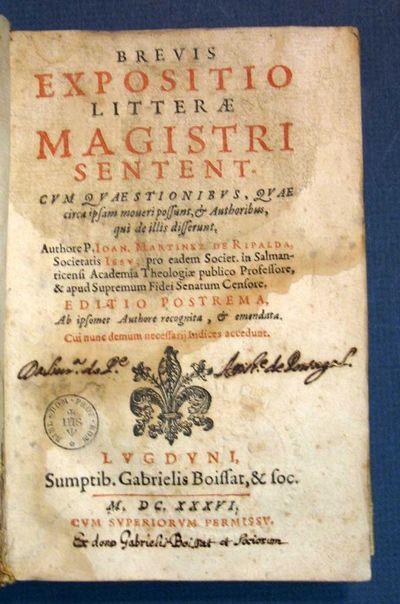 Spanish theologian Juan Martínez de Ripalda was born at Pamplona, Navarre, where entered the Society of Jesus (Jesuit Order) in 1609. He taught philosophy at Monforte, theology at Salamanca, and "was from there called to the Imperial College of Madrid, where, by Royal Decree, he taught moral theology. Later, he was named censor to the Inquisition and confessor of de Olivares, the favorite of Philip IV, whom he followed when he was exiled from Madrid." Ripalda is described by Southwell as "religious, ... subtle in argument, sound in opinion, clear & focused in expression, and well-versed in St. Augustine & St. Thomas. According to Drews, no Jesuit ever occupied this chair at the University of Salamanca with more honor."Notably, Hurter considers Ripalda, along with Lugo, "first among the contemporary theologians of Spain, and perhaps of all Europe." [Perez Goyena. CATHOLIC ENCYCLOPEDIA]. Scarce. No copies at auction these last 25+ years, OCLC records but 3 worldwide & KVK 3 additional (2 of which are held by the British Library). (Inventory #: 26886)
$1,750.00 add to cart or Buy Direct from Tavistock Books
Share this item

POEMS.; Translated by Roger Fry. With Commentary by Charles Mauron

London : Chatto & Windus , 1934
(click for more details about POEMS.; Translated by Roger Fry. With Commentary by Charles Mauron)
View all from this seller>