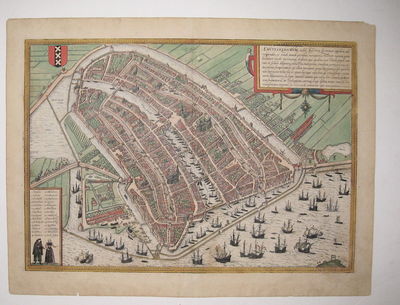 by BRAUN, Georg & HOGENBERG, Frans
Cologne: Braun & Hogenberg. unbound. View. Engraving with original hand coloring. Image measures 13.5" x 19.25". This plan of Amsterdam, based on Cornelis Antoniszoon's 1544 woodcut plan, shows the city with its medieval walls and defense systems. Published circa 1572, the map celebrates the city's booming commerce and trade by showing its rivers and canals teeming with ships of all sizes. At the center of the city is the dam of the Amstel River, which was lined with public buildings. Red colored roofs of buildings throughout the city accurately depict the common medieval style of Dutch architecture. Among them, the extravagant size of churches indicates their architectural and social prominence. A small key with two figures in the lower left corner identifies these and other important buildings, while text in the upper right corner describes Amsterdam's growing commercial prominence. The city's coat of arms is at the upper left. Latin text on verso. The map is in good condition with few chips and tears, not affecting the image. Candlewax stain on ship near center of bottom edge of image. Georg Braun (1541-1622) was a Catholic cleric who edited the "Civitates orbis terrarum," first printed atlas of the towns of the world. The 6-volume collection comprised 546 prospects, bird's-eye views and maps of international cities, with Hogenberg's collaboration on the first 4 volumes. Together, these two geographers created a work that set new standard for cartography for the next century. This plan of Amsterdam demonstrates the high quality of their work. (Inventory #: 235965)
$2,700.00 add to cart or Buy Direct from
Argosy Book Store
Share this item

London : W.R. Royle and Son Ltd , 1976
(click for more details about Bessie)
View all from this seller>