A Complete View of the Dress and Habits of the People of England from the Establishment of the Saxons in Britain to the Present Time: Illustrated by Engravings Taken from the Most Authentic Remains of Antiquity, To which is Prefixed an Introduction, Containing a General Description of the Ancient Habits in Use Among Mankind, From the Earliest Period of Time to the Conclusion of the Seventh Century. (Two Volumes) 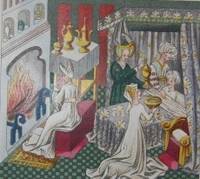 by Strutt, Joseph
London: Henry G. Bohn, 1842. Full Morocco. Near Fine. Two volumes, 4to. vi, 279 pp. With a total of 153 hand-colored plates, most of them brilliantly so, with the use of gold leaf it would appear in a good many. This is an augmentation of an earlier edition from 1796 by ten plates, and the quality of the coloring further enhances the desirability of this edition. All the plates called for are present, but at least in this copy they are not in order, and in the second volume in particular it might seem that the original compiler had had too much mead as he was inserting the plates. The eccentric ordering, nonetheless, should not greatly diminish one's reveling in the images, and at the end of the second volume there is a list of all the plates and their sources. Inconspicuous embossed library seal stamp affected a few leaves of both volumes. A few tissue guards, text leaves and plate margins (and the backs of a few plates) have light foxing. An insignificant amount of other soiling. The overwhelming majority of plates are clean and fresh. Modern full blue morocco without flaws. (Inventory #: 001925)
$2,600.00 add to cart Available from
White Fox Rare Books & Antiques
Share this item
White Fox Rare Books and Antiques
Offered by