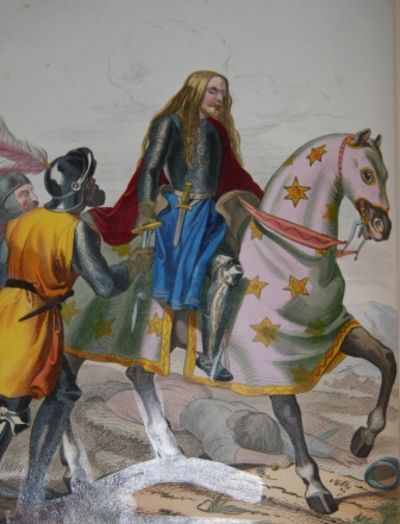 by C. Sabattini, C. Rusconi, etc.
Firenze: David Passigli, 1845-6. First Edition. Full Morocco. Near Fine. Uncommon title with 100 bright and hand-colored plates depicting major figures and events of Italian history. Each plate accompanies generally eight to twelve text pages relating a tale or biography of the figure(s) depicted. The articles are ornamented with lovely ornate borders which vary in color and design from one piece to the next. The work itself was issued at a time when Italian consciousness was finally being roused with the first rumblings for unification, which would finally come to fruition two decades later, but it is significant that in this work the heros and heroines highlighted come from all over the Italian peninsula, including Naples, Venice, etc. then separate kingdoms, principalities, or under Austrian or Church control. The beauty and scale of this two volume set ensured that it would be treasured and also that it would be lovingly consulted repeatedly to learn about or re-acquiant oneself with the rich heritage of Italian legends. The plates themselves are colored in an interesting manner, with the background and secondary characters and scenery colored lightly, with a thin layer, and the focal point featuring deeper colors, enriched with gum arabic, and the effect of this two-fold approach is to render almost a depth of field. This copy of the set is clean throughout, with both the plates and text leaves nearly spotless. The red morocco was bound by Stikeman & Co. of New York. It has some rubbing along the joints and edges, with heavier wear in the corners. Nonetheless the binding remains handsome and complements well the luxuriance of the content. (Inventory #: 002204)
$3,750.00 add to cart Available from
White Fox Rare Books & Antiques
Share this item
White Fox Rare Books and Antiques
Offered by