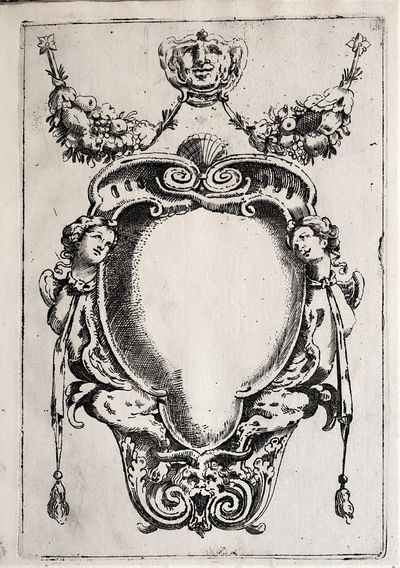 by MITELLI, Agostino (1609-1660)
[Milan: Giovanni Battista Paganelli, 1650. Sheet size 267 x 195 mm. 24 unnumbered plates of etchings after Mitelli by an unknown engraver, including title etching, on stubs. Platemarks: 241/ 246 x 166/168 mm. Most printed in brown ink (bistre). Watermarks: six-pointed star (cf. Briquet 6033) or no watermark. First plate slightly soiled and with small repaired patch at top and short repaired tear at bottom, 7th plate torn & repaired along inner platemark just affecting top of image, small stain at top of penultimate plate, lower platemark of pl. [15] shaved. Modern marbled boards. Plates numbered 210-233 in early ink.Rare and previously overlooked edition of a suite of 24 etchings reproducing Mitelli's first series of decorative "cartouches" or frames. Father of Giuseppe Maria Mitelli, Mitelli père was an influential practitioner of the illusionistic painting technique known as quadratura painting. Several suites of prints were published after his drawings of architectural design and ornament: "three sets of cartouches and the Freggi [dell'architettura, a suite of 24 etched friezes]. His first set of twenty-four etched cartouches appeared in Bologna in 1636 ... [the etchings] were probably influenced by Agostino Tassi's prominent cartouches in the Sala de' Corazieri in the Quirinal palace.... Although Mitelli has been credited with originating the asymmetrical cartouche ... and his cartouches may well have been a point of departure for Stefano della Bella's Capricci (1646), his influence remains to be studied" (Millard). While art historians attribute the etching of all but this first series to Mitelli himself, only the Freggi can securely be attributed to him.Published descriptions of the various editions of the present series of 24 cartouche designs, none of which were etched by Mitelli himself, have been wildly inaccurate; in part because sets often mix etchings from different editions. Our copy consists of a uniform or "pure" series of plates. Published in Milan for the Milanese publisher Giovanni Battista Paganelli or Paganello, and dedicated to Bandini, Archbishop of Siena, the edition has only recently been recognized* as an original edition (Series II), printed from new plates. Executed for Paganelli ca. 1651-1654 by an anonymous engraver, the etchings are reverse copies of those published in Bologna (Series I) in 1636, for the print-publisher Agostino Parisini (with a dedication to Count Francesco Maria Zambeccari). The Parisini suite itself reproduces drawings by Mitelli, executed ca. 1634 in black chalk and brown ink. Only two complete drawings survive, in a private collection in France; another partial drawing in the Metropolitan Museum, dated to ca. 1609/10, shows a vertical section of the 7th plate (Accession no. 57.581.53).  In the 1640s the Roman publisher Giovanni Giacomo Rossi in Rome acquired the Parisini plates and re-issued them with what appears to be a reworked state of plate 1, adding his own imprint (Series Ia). Sets of Parisini's Bolognese plates also appear occasionally with a title etching or supplemental etching by Mitelli's son Giuseppe: originally produced and published in Perugia in 1653 as a wedding invitation for the marriage of Anna Colonna and Duke Paolo Spinola in Genoa, the couple's arms and the text were erased from the plate for the issue that appears with the Parisini series, a fact which led bibliographers to incorrectly describe a ghost edition supposedly published in Perugia. This Milanese edition is therefore one of only two early independent editions of etchings reproducing Mitelli's designs, each by a different anonymous engraver. The artistic quality of the present etchings is absolutely comparable to the Bolognese series. The suite is rare: the only institutional copies of this Milanese edition are held at the Bibliotheca Palatina in Parma and the Victoria and Albert Museum (lacking one plate).Two later versions, also in reverse, copying either Series I or II, were engraved in France, where Mitelli's sensibility resonated hugely, and published by the print dealers Paul Roussel and Pierre Mariette; the French series are easily recognizable for their markedly inferior quality. The first etching of the series shows an archway onto ancient ruins with a perspectival view of trees and in the background a town with a broken tower; the dedication is inscribed on a frieze of broken entablature in the foreground. Some of the plates contain two or three compartments with a cartouche and other ornamental motifs, and three plates are devoted to purely ornamental fantasies of sprays, volutes, vases, etc. The slightly asymmetrical cartouches incorporate volutes, ribbons, shells, grotesques, mermaids, dolphins, cornucopiae, garlands, leafy branches, snarling lions and putti; most are empty but a few contain further decoration; some are set between pillars or below cornices or statues. All seem to be swaying in a soft baroque wind and the overall effect is hypnotic. That the suite was actually used as a "pattern book" by artists appears doubtful.Cf. Berlin Katalog 562 (Parisini ed.); Guilmard, Maîtres ornemanistes, p. 314, no. 26 (1st para.); Ubisch, Katalog der Ornamentstichsammlung Städtisches Kunstgewerbemuseum zu Leipzig, p. 78 (23 pl., edition unknown). Cf. Millard Architectural Collection / Italian p. 229.  *Thanks to Olivier Walas, member of an international team preparing a new study of Agostino Mitelli's Genoese period, for his generous help and corrections concerning the identification of this edition.  (Inventory #: 2450)
$2,750.00 add to cart or Buy Direct from
Musinsky Rare Books
Share this item

by STENCIL-PRINTED MASS OF THE DEAD

by JESUIT COLLEGE OF MUNICH