Portugal and Gallicia with a Review of the basque provinces; and a few remarks on Recent Events in Spain 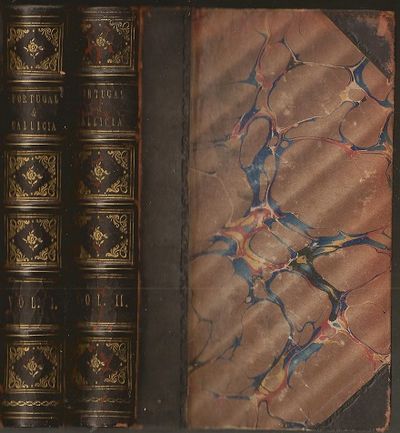 Henry John George Herbert, 3rd Earl of Carnarvon FRS (June 8, 1800 - December 10, 1849), known as Lord Porchester from 1811 to 1833, was an British writer, traveler and politician. Herbert was born in London, the eldest son of Henry George Herbert, 2nd Earl of Carnarvon, and his wife Elizabeth Kitty, daughter of John Dyke Acland. He was educated at Eton and Christ Church, Oxford. In 1831 he was elected to the House of Commons for Wootton Bassett as a Tory, a seat he held until the following year when the constituency was abolished by the Great Reform Act. In 1833 he succeeded his father in the earldom and entered the House of Lords. It was during the Herbert's lifetime that the family seat of Highclere Castle was redesigned and rebuilt by Sir Charles Barry, an English architect, into a Victorian mansion. Lord Carnarvon married Henrietta Anna, eldest daughter of Lord Henry Thomas Howard-Molyneux-Howard, in 1830. They had two sons and one daughter. He died at Pusey in December 1849, aged 49, and was succeeded in the earldom by his eldest son Henry Herbert, 4th Earl of Carnarvon, who became a prominent Conservative politician. His second son the Hon. Auberon Herbert also gained distinction. Lady Carnarvon died in 1876.