BIOGRAPHIA DRAMATICA; OR, A COMPANION TO THE PLAY HOUSE 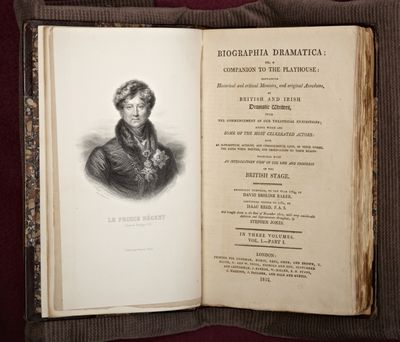 by (EXTRA-ILLUSTRATED). BAKER, DAVID ERSKINE
London: Longman, Hurst, Rees, Orme, and Brown, 1812. Third Edition. 229 x 146 mm. (9 x 5 3/4"). Three volumes bound in six. Edited by Stephen Jones. Third Edition. Inoffensive 19th century dark brown straight-grain half morocco, wide raised bands, gilt titling, marbled endpapers, top edges gilt, other edges untrimmed. EXTRA-ILLUSTRATED with 164 portraits of playwrights, actors, and others affiliated with the theater, one of the portraits hand colored. Extra title label bound in. Front pastedown of each volume with bookplate of Hildegarde F. Schine. Joints somewhat rubbed, hinge at the back of first volume open, several scuffs and abrasions to spines, most corners rather worn, but the bindings all completely solid, with much of the wear masked by neat refurbishing. Variable offsetting (never severe) from inserted engravings, volume V with intermittent minor foxing and browning, isolated places elsewhere inoffensively foxed or spotted, but the text generally fresh and clean. This survey of the British theater contains "historical and critical memoirs, and original anecdotes, of British and Irish dramatic writers, from the commencement of . . . theatrical exhibitions," which Baker dates from the mystery plays of Richard II's reign (while recognizing the earlier efforts of travelling players, dating back to the late 12th century). There are brief biographies of playwrights, players, producers, and patrons, followed by listings and summaries of plays, with their date of first publication. Our extra-illustrated volume is furnished with portraits of a number of these luminaries. The grandson of Daniel Defoe and godson of the earl of Buchan, Baker (1730-67?) was a studious boy whose intelligence (and social connections) earned him a spot in the Tower of London training course for royal engineers. But the prospect of a scientific career was thwarted by Baker's love of the theater, and to his family's consternation, he repeatedly ran away to join troupes of actors. He married the actress Elizabeth Clendon (d. 1778) in 1762, and the couple lived mostly in Edinburgh, where Mrs. Baker was a star of the stage. Appearing for the third time in 1812, our book was first issued as "The Companion to the Play House" in 1764, then revised and expanded by Isaac Reed, being printed under the present title in 1782. DNB notes that "Baker's work was indebted to that of his predecessor Gerard Langbaine, and adds little concerning early dramatists, but has remained a useful reference work for the history of the early eighteenth-century stage." Although there are some condition issues here, the fact that the leaves have been untrimmed means that there are very ample margins throughout, and although there is some offsetting from the inserted portraits, these are plentiful, clean, and pleasing. There are other copies of the three early editions for sale in the market currently, but none of these others is extra-illustrated. (Inventory #: ST12176-2)
$520.00 add to cart or Buy Direct from
Phillip J. Pirages Fine Books
Share this item

by GREGORY I, POPE