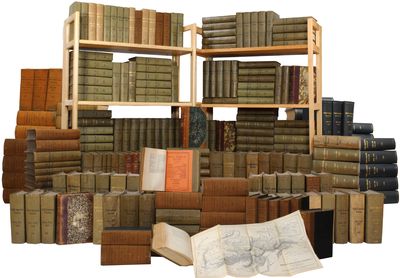 by EMERSON, Ralph Waldo, James Russell Lowell, Walt Whitman, Mark Twain, Henry James, John Steinbeck, and Others
Boston; New York: Cummings and Hilliard; [et al.], 1940. Hardcover. Good. Magazine. 238 bound volumes. Octavos. A near-complete run of the *North American Review*, America's most important literary journal of the 19th and early 20th Century. A consecutive run of volumes 10-248 dating from January 1820 through the final 1939-40 Winter issues, lacking only the first nine volumes, one quarterly issue from 1868 (October), and six monthly issues from 1894 (January-June). Most volumes are bound in full beige or blue cloth (13 are in half calf and marbled paper boards); volumes 174-248 have the original wrappers bound in. Founded in 1815, the *NAR* established itself as the most intellectual magazine in America. It quickly gained an international reputation and was a leading literary force in American letters throughout its 125-year history. Known for its long essay reviews of contemporary American and European literature, it also published scholarly articles on American society and current affairs, serving both as a platform for much of the most exciting social and literary commentary in the country, and as an arena for public debates on slavery and other controversial issues of the day. Most importantly, the magazine published contributions by some of America's best writers, ranging from Ralph Waldo Emerson to Thomas Wolfe, and including Henry Wadsworth Longfellow, Walt Whitman, John Russell Lowell, Mark Twain, Henry James, John Steinbeck, and others. Among the many complete works featured in this long run are Emerson's lectures on "Michael Angelo," "Milton," and five other essays and lectures; Washington Irving's "The Northmen"; and Longfellow's "Defense of Poetry." Walt Whitman contributed seven essays over a 10-year period, including: "The Poetry of the Future," "Old Poets," and "Have We a National Literature," and Mark Twain contributed five satires and essays, including: "In Defense of Harriet Shelley," "To the Person Sitting in Darkness," and "Edmund Burke on Croker and Tammany." Also noteworthy is Chief Justice Lemuel Shaw's "Slavery and the Missouri Question" from 1820, and Lewis Cass's influential articles on American Indian Policy. Edgar Allan Poe's first published work, *Tamerlane, and Other Poems*, received its first national notice in the October 1827 number, Sidney Fisher published his influential review of *Uncle Tom's Cabin* in 1853, and Edward Hale published his famous early review of Whitman's *Leaves of Grass* in January 1856. During the Civil War Lowell became editor and published influential articles on Lincoln and Seward. After the war he contributed the many important lectures on literature that made him famous. Important works from the 20th Century include *The Ambassadors* by Henry James serialized in twelve monthly issues in 1903, "A Paper on Free Verse" by Robert Bridges from 1922, and five short stores by John Steinbeck, two of which: "The Red Pony" (a.k.a. "The Gift") and "The Great Mountains," were later published as the first two chapters of *The Red Pony*. An ex-library set with ink stamps or bookplates on most front pastedowns, a small embossed stamp or occasional ink stamp on most title pages, and an occasional ink number stamp on some bottom page margins. The 13 volumes in contemporary half calf are scuffed and worn, thus good only, about ten volumes have a few loose or detached leaves, and one short story by Thomas Hardy was neatly removed from the October 1903 issue, else overall a very good set. A scarce large assemblage of first appearances of major American literary works and articles. A list of notable selections is available. (Inventory #: 379011)
$15,000.00 add to cart or Buy Direct from
Between the Covers Rare Books
Share this item