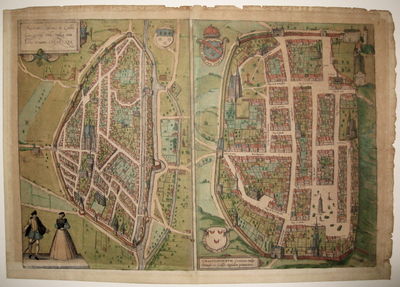 by BRAUN, Georg & HOGENBERG, Frans
Cologne: Braun & Hogenberg. unbound. Two bird's-eye plans on one sheet. Copper engraving with original hand coloring. Image measures 13" x 18.75". These two bird's-eye plans on one sheet depict the French cities of Chartres and ChÃ¢teaudun. Chartres is shown from the southeast, with its famous cathedral at the center of the frame towering over the comparatively diminutive city around it. This prized church became the model for many other Gothic churches and is nearly synonymous with the city in which it is located. A number of lesser churches are also shown in detail, as are houses, fields, and gardens. Similarly detailed is the map of ChÃ¢teaudun, shown from the east as to clearly illustrate how the city leans up against the ridge of the hill to its right. This city's prominent buildings are the 12th-century chateau at the top right and the church of La Madeleine at the upper left. Its seal and coat of arms are also rendered. he print is from Braun's city atlas "Civitates Orbis Terrarum", a collection of city views and plans created as a companion to Ortelius' "Theatrum Orbis Terrarum" and published between 1572 and 1617. Latin text on verso. The plans are in very good condition with some overall toning and wear to the title of the Chartres view. Chips in the margins not affecting the image. Some mat burn and margin folds from being previously framed. Georg Braun (1541-1622) was a Catholic cleric who edited the "Civitates orbis terrarum," a collection of 546 prospects, bird's-eye views and maps of international cities. Hogenberg created the tables for the first 4 volumes. Together, these two geographers created a work that set new standard for cartography for the next century. These views demonstrate the high quality of their work. (Inventory #: 239462)
$500.00 add to cart or Buy Direct from
Argosy Book Store
Share this item