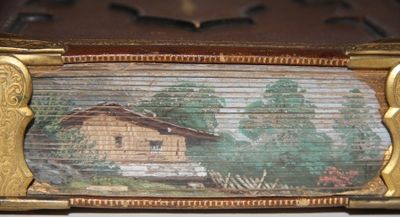 Full Morocco
Full Morocco. Very Good. A highly unusual set of fore-edges. N.d., late nineteenth century. The fore-edge paintings are views of a Swiss chalet, a lakeside scene with two sailboat at rest and rendered loosely in the style of Claude Lorrain, and a view of a lake shore. Each of the paintings is in an oval cameo that is surrounded by bright guaffered edges that contain an elaborate floral design. Since the album leaves are made of thick card, these fore-edges are fully visible when the book is closed tight -- it would be impossible to fan the leaves, and thus impossible to do fore-edge paintings that disappear when a book is shut. Yet the execution of fore-edge paintings on an album of this type had to have been uncommon and thus more than compensates for their mechanical limitations. The binding itself is in the Gothic style, with raised leather banding on the front and back together with a raised center lozenge medaillion. The spine has five raised bands and typical gilt decoration in the compartments. The album is shut firmly with two decorative brass clasps. After a chromolithographic title page with "Album for Photographs" written, the album has 24 leaves, with four slots each on the front and back of each leaf. A little over half of the slots are filled with religious imagery, photos of artwork, much of a religious nature but also including classical statuary, busts of more contemporary subjects, animal portraits, with some concentration on feline images, portraits of a few well-known personages. To most these images lend some period authenticity and charm, but they will be secondary to the fore-edges and the binding. The leather is heavily rubbed along the edges and has scuffs elsewhere. The joints are rubbed. The spine has a crack line down its vertical center. The album is supposed to have four pearl studs on the front and rear boards respectively to balance it and protect the leather below; the front is missing two of these studs and the back, one. (Inventory #: 002407)
$600.00 add to cart Available from
White Fox Rare Books & Antiques
Share this item
White Fox Rare Books and Antiques
Offered by

Picturesque America; or, the Land We Live In. A Delineation by Pen and Pencil of the Mountains, Rivers, Lakes, Forests, Water-Falls, Shores, Canons, Valleys, Cities, and other Picturesque Features of our Country. (Two Volumes) WIth Illustrations on Steel and Wood, by Eminent American Artists.

New York : D. Appleton and Company , 1872, 1874
(click for more details about Picturesque America; or, the Land We Live In. A Delineation by Pen and Pencil of the Mountains, Rivers, Lakes, Forests, Water-Falls, Shores, Canons, Valleys, Cities, and other Picturesque Features of our Country. (Two Volumes) WIth Illustrations on Steel and Wood, by Eminent American Artists.)
View all from this seller>