The Disgraced Wife of George IV, Caroline of Brunswick, Writes George Canning, Vowing to Return to England to Clear Her Name “The Princess of Wales will be much obliged if Mr. Canning will inform HRH the Prince Regent of the determination the Princess has been obliged to take of returning to England to be vindicated once more her character”. 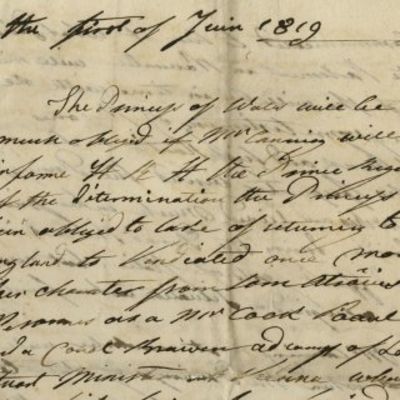 01/06/1819. Caroline of Brunswick|George IV Caroline’s father was the ruler of Brunswick-Wolfenbüttel in Germany, and her mother, Princess Augusta, was the sister of George III. In 1794, she was engaged to her first cousin and George III's eldest son and heir George, Prince of Wales, although they had never met and George was already married illegally to Maria Fitzherbert. George and Caroline married the following year, and nine months later Caroline had a child, Princess Charlotte of Wales.George could not stand Caroline.  Shortly after Charlotte's birth, George and Caroline separated. By 1806, rumors that Caroline had taken lovers and had an illegitimate child led to an investigation into her private life.It was alleged that Caroline had admitted to having had an illegitimate child who was known as William Austin.  A Royal Commission was established to examine the allegations and completed its work in the summer of 1805.  Caroline was cleared of the gravest charge of adultery but her behavior in other respects was open to 'very unfavorable interpretations'.This investigation did not provide the Prince of Wales with such damning evidence of his wife's immorality that he could rid himself of her. The whole episode lowered him in public regard. To many it seemed monstrous that his wife should be arraigned for lapses which appeared less grave than his own. The Prince was mocked and lampooned, and he resented the attacks upon him.  As his popularity waned, so Caroline's increased.Then she she left for a period of residence abroad on the grounds that since the English Court would not give her the honors due to a Princess of Wales, she was content to be 'Caroline, a happy merry soul'.  Caroline moved to Italy, where she employed Bartolomeo Pergami as a servant. Pergami soon became Caroline's closest companion, and it was widely assumed that they were lovers.In November 1817, Charlotte died after giving birth to her only child, a stillborn son. For the most part, Charlotte had been immensely popular with the public, and her death was a blow to the country.  George refused to write to Caroline to inform her, leaving it for their son-in-law Leopold to do, but Leopold was deep in grief and delayed writing. George did, however, write to the Pope of the tragedy, and by chance the courier carrying the letter passed by Pesaro, and so it was that Caroline heard the devastating news. Caroline had lost her daughter, but she had also lost any chance of regaining position through the succession of her daughter to the throne.George was determined to press ahead with a divorce and set up a commission chaired by the Vice-Chancellor John Leach to gather evidence of Caroline's adultery. Leach sent three commissioners to Milan.  The commission included William Cooke, J. A. Powell and Col. T. H. Browne.In 1819, Caroline traveled into France and seemed set to return to England to defend her honor against the latest allegations alleged by these three.Autograph letter signed, June 1, 1819, to George Canning, the future Prime Minister and at the time “Private Councilor to to HRH the Prince Regent,” George IV. With the original franking panel and stamps.   Caroline writes in halting English.“The Princess of Wales will be much obliged if Mr. Canning will inform HRH the Prince Regent of the determination the Princess has been obliged to take of returning to England to be vindicated once more her character from some atrocious Personnes as a Mr. Cook, Poaul and a Conol Brawen ad camps of Lord Stuart Minister at Vienna which from high braivery (bribery) have obtained false and foul evidence against the Princess of Wales conduite from viz Leo Levanter which had been send out the Service somme time past: The Princess of Wales will arrive in England when Mr. Canning will communicate to her at what period the Parlement in November will meet that she will be in time with all her testimony of Persones of Rank and high standing in Law who frequently visited the Princess of Wales and lived much in her present Societe during the Period she lived in the different parts of Italie but never had occupied a situation in her family. Mr. Canning must remember well that when the Princess of Wales left England she told Mr, Canning at that Epoque that she never would under any circumstances return to England except if ever her character would be again attaqued by atrocious Personnes. She keeps to her words and now is the Right Moment further to return and to ply for the Protection of that Noble Nation which has hitherto for ever protected her. The Princess of Wales will be glad to have as soon as possible an answer through the channel of Mr. Canning that she may sett out as soon as possible; a letter to Mr. Talani her Banker at Roma will be enough that Mr. Canning’s letter will reach her immediately wherever she is. The Princess of Wales remains Mr. Canning’s most sincere friend. Caroline Prs. of Wales.” She adds: “Mr. Henry Brougham has since three month all the fals evidence from the Law People with these true character, and in what way these have been braived (bribed) by the three Emissaries from England at last the Autreichen (Austrian) government at Milan has sent the three English, Mr. Cook, Mr. Poaul and Brawen by order of the Police out of Italie, and the Police at Milan has Brunet all the fals testimony with which these are so proud of it to bring them to London and before the Parlement.”Caroline never arrived in England in 1819, perhaps having been told it would not be auspicious.  King George III died shortly after, and in 1821 the coronation of King George IV took place. She showed up for the ceremony to assert her rights as Queen, but she was noisily barred and made to wait outside.  That night she took ill and was dead within a couple weeks. (Inventory #: 9872)
$2,000.00 add to cart Available from Raab Collection
Share this item

A Very Rare Signed Check of George Washington as President, Depositing Money in the Bank of the United States The money was proceeds from sale of land in the west, which Washington had invested in to help develop that area after the Revolution

09/1795
(click for more details about A Very Rare Signed Check of George Washington as President, Depositing Money in the Bank of the United States The money was proceeds from sale of land in the west, which Washington had invested in to help develop that area after the Revolution)

A Huge Signed Photograph of Ernest Hemingway at his Famous Lodge in Sun Valley, Idaho, Inscribed to His Friend and Boxing Coach, George Brown; The backstamp identifies this as a Life Magazine photograph taken by Capa, one of the great photographers of the era, who did photo essays on Hemingway for Life in 1940 and 1941

1940
(click for more details about A Huge Signed Photograph of Ernest Hemingway at his Famous Lodge in Sun Valley, Idaho, Inscribed to His Friend and Boxing Coach, George Brown; The backstamp identifies this as a Life Magazine photograph taken by Capa, one of the great photographers of the era, who did photo essays on Hemingway for Life in 1940 and 1941)
View all from this seller>