An Infinite Summer [Signed, with ALS to John Fowles] 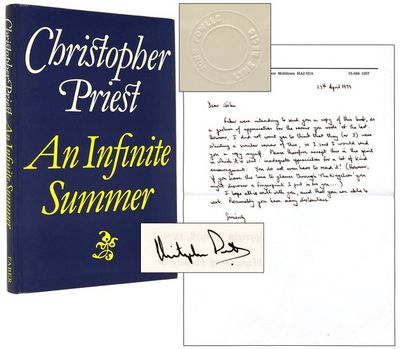 by PRIEST, Christopher
London: Faber and Faber. (1979). Signed by Priest, and with an autograph letter signed by Priest to John Fowles laid in, saying Faber was intending to send him a copy but Priest feared it would be misconstrued as a review solicitation, given the strong review Fowles had given a previous book [A Dream of Wessex], so Priest was sending a copy along himself so that it be received only as "inadequate appreciation for a lot of kind encouragement. You do not even have to read it! (However, if you have the time to glance through "The Negation" you might discover a fingerprint I put in for you....)" One may infer Priest means a metaphorical fingerprint, as no actual fingerprint is in evidence. An Infinite Summer is a collection of stories, including the first of his stories to feature the Dream Archipelago, which appears in a number of his works. Priest has won the James Tait Black Memorial Award, the World Fantasy Award, and the British Science Fiction Association's award for Best Novel four times. The book is fine in a fine dust jacket, with Fowles' blindstamp on the front flyleaf; the letter is folded to fit in the book, else fine. Fowles, in his A Dream of Wessex review, had called Priest "one of our most gifted young writers of science fiction...I think not only H.G. Wells but Thomas Hardy himself would have enjoyed and approved of it." A nice literary association copy between two highly regarded British writers. Unless otherwise noted, our first editions are first printings. First Edition. Hardcover. Fine. (Inventory #: 029605)
$450.00 add to cart Available from
Ken Lopez - Bookseller
Share this item