Circa 1890 Broadside Advertisement Truth Stranger Than Fiction! The Old Oaken Bucket in Prose...for Pure Wholesome Water for Everybody! And Plenty of It, and How to Get It! Address, The Empire Well Drilling Company, Drillers of Artesian Water Wells 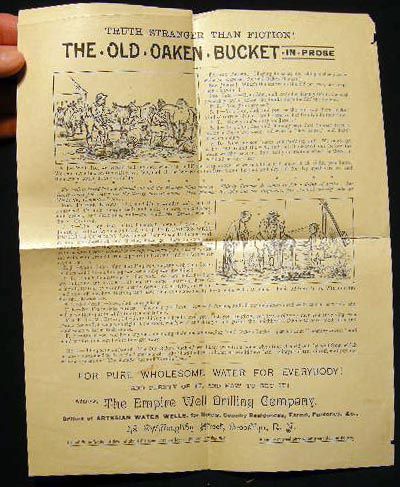 by (Americana - Ephemera - Engineering)
45 Willoughby Street, Brooklyn New York: Empire Well Drilling Company, 1890. A serio-comic 'story' advertising broadside castigating less-than-sanitary conditions to be found down the old well on the farm and the solution to the problem, provided by this Brooklyn well drilling company; "A supply of good pure water guaranteed or no pay."; with two illustrations, depicting the events in the story, signed in the plate 'Ferguson'; the story with no relation to the Samuel Woodworth poem, although it is referred to in the text in a rather sarcastic manner, "...(Woodworth was) likely away from home when they cleaned out the well from which he was accustomed to draw the "emblem of truth;" had he been at home he would have had a glimpse of truth itself, and perhaps written a poem on "The Family Rat and Vermin Trap."; no date, circa 1890; printed in about 1/2 dozen typefaces, a good example of late 19th century job printing advertising work; approx. 9 1/2" x 12" size; little chipping to edges, splitting on old fold line, pencil calculations on back, notes; in very good condition. . First Edition. Not Bound. Very Good. (Inventory #: 22395)
$65.00 add to cart or Buy Direct from Certain Books
Share this item
Certain Books
Offered by