French Creek Canyon, Black Hill, D.T.," a watercolor showing the sheer canyon walls, from top to bottom, with the boulder-strewn stream below amid stands of pine and hardwood. Black Hills, Dakota Territory, 1875 or 1876 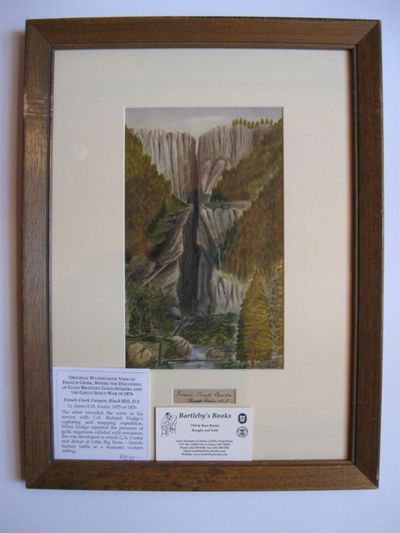 by Foster, Lt. James E.H.
Original watercolor, 9 1/2 x 5 3/4 inches, title, as above, written below the image, inscribed on the verso (visible in the frame): "To Col. Charles Bird / Adjt. 23rd Infty. / With compliments of / J.E.H. Foster / Lt. 3d Cavalry / Feby 12th 1876." The watercolor itself was probably painted in July, 1875, or soon thereafter (given the absence of snow, it was almost certainly accomplished before the 1875-1876 winter set in, i.e., before the 12 February 1876 inscription), when Foster was engaged under Col. Richard I. Dodge in exploring and mapping French Creek. Foster (1848-1883) entered military service toward the end of the Civil War and earned his commission as a 2nd lieutenant in 1873 (for a short biographical sketch, see "Encyclopedia of Frontier Biography," vol. I, p. 511). Col. Charles Bird (1839- 1930), the recipient, served in the Civil War, receiving notices for gallant and meritorious service at Fredericksburg, Spottsylvania, and Petersburg, beginning the conflict as 2nd lieutenant and ending as a colonel and regimental commander. In 1876 he was in the West serving as Regimental Adjutant of the 23rd Infantry and he continued his long service in the army until 1902 when he retired as a brigadier general. Fine. Matted glazed and framed (some scuffing to the frame). (#6004). An attractive, on-the-spot rendering of a site central to the events leading up to Lt. Col. George A Custer's fatal 1876 expedition. Painted in the summer of 1875, by an officer with the 3rd Cavalry, a topographical surveyor and draughtsman and a competent watercolorist, who served in the Black Hills Expedition during the summer of 1875, under Col. Dodge. It was the discovery of gold at French Creek during Custer's Black Hills expedition in the summer of 1874, and its official confirmation during Dodge's expedition in 1875, that set the Sioux on a rampage that led to the Great Sioux War of 1876 and Custer's defeat at Little Big Horn. Today the portion of French Creek depicted here is part of the 2200 acre French Creek Natural Area. At the time of the painting it was the site of two Black Hills Expedition encampments, Custer City and Camp Harney. Col. Dodge and his men, including Lt. Foster as his topographical officer, left Camp Jenny, on Beaver Creek, on June 9th, 1875, and reached Harney Peak at French Creek on June 13th. Four days later Dodge sent a telegram to General Crook: "Harney's Peack, June 17. Gold has been found in paying quantities on French Creek. Custer's report is confirmed in every particular." Once released to the press, the news brought the arrival of more gold seekers, aggravating the situation with the Sioux. On July 10, 1875, a note from Foter informed Dodge that "signs of Indians were everywhere in the vicinity he was surveying ... on July 15 Dodge pronounced as more than acceptable another map, by Second Lieut. Foster, of a scout he had just completed ... building on the work of Bourke, he and his two subalterns were on course to produce a visualization of the Black Hills topography that he thought would equal in merit any simialr image extant" (Wayne Kin's "Col. Richard Irving Dodge: The Life and Times of a Career Army Officer," U. of Oklahoma Press, 2006, pp. 206-211). In December 1875 the Sioux were ordered to return to the confines of the reservation by the following January 31st; they chose to ignore the deadline and the Great Sioux War ensued. The presentation inscription on this watercolor is dated barely two weeks after the deadline and must have been made shortly before Foster departed camp with his unit to fight the Sioux. Foster's artistic talents were also employed during the 1876 campaign. On June 12, 1876, five days before the Battle of the Rosebud and a week before Little Big Horn, First Lt. John G. Bourke, also of the 3rd Cavalry, wrote: "Lieut. Foster, 3d Cavalry, has made a series of creditable, rough pencil sketches of points of interest along the route: it is his intention to send them to 'Harper' Weekly' for publication" ("Diaries of John Gregory Bourke," edited by Charles M. Robinson, 2003-2010, vol. I, p. 308). Foster fought heroically on the Rosebud: "Captain Henry's battalion was soon exposed to heavy enfilading fire that was only checked by a brilliant charge made by Lieutenant Foster ... at the head of his platoon" (Henry R. Lemly "Fighting the Indians," in "The Papers of the Order of Indian Wars," edited by J.M. Carrol, Old Army Press, 1975, pp. 13- 18). We have been unable to trace any of Foster's sketches in "Harper's Weekly," but his work is included in the collections at the Museum of Nebraska Art. (Inventory #: 58774)
$7,500.00 add to cart or Buy Direct from
Bartleby's Books
Share this item

A NEW MAP OF ARKANSAS with its canals roads & distances

Philadelphia, [PA] : Published by Thomas, Cowperthwait & Co , 1850
(click for more details about A NEW MAP OF ARKANSAS with its canals roads & distances)

A NEW MAP OF THE UNITED STATES OF AMERICA

Philadelphia, [PA] : Published by Cowperthwait, Desilver & Butler , 1850
(click for more details about A NEW MAP OF THE UNITED STATES OF AMERICA)
View all from this seller>