DEARFORGIL: THE PRINCESS OF BREFNEY. A HISTORICAL ROMANCE OF 1152 TO 1172. "By the Author of THE LAST EARL OF DESMOND." 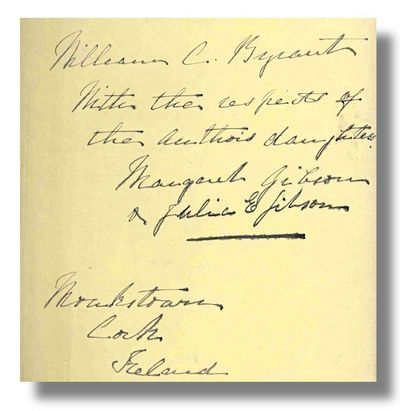 by [Gibson, Charles Bernard]
London: J.F. Hope, 1857. vi,[2],287,[5]pp. Small octavo. Original cloth, decorated in blind, spine lettered in gilt. Spine extremities worn, some general hand smudging, light tidemark in top edge around gutter through last half of the text and to the endsheets, front free endsheet creased; still, a good, sound copy. First edition of this anonymously published novel by the sometime novelist, historian and clergyman, and one time chaplain at Spike Island prison. Brown notes that "the tone throughout is anti-national, and most offensive to Catholic feeling. The frequent humorous passages are nearly always vulgar, and in some instances coarse." A decent association copy, inscribed on the front free endsheet: "William C. Bryant With the respects of the Author's daughters Margaret Gibson & Julia E. Gibson Monkstown Cork Ireland." A second edition appeared in 1884, the year before the author's death. OCLC/WORLDCAT locates ten copies of this original edition. BROWN 639. OCLC: 15681080. (Inventory #: WRCLIT68925)
$350.00 add to cart or Buy Direct from
William Reese Co. - Literature
Share this item