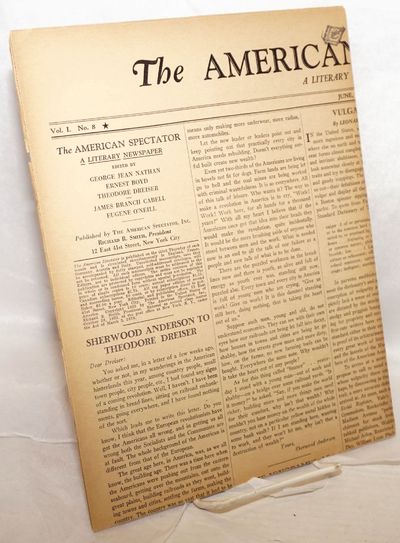 by Nathan, George Jean, Ernest Boyd, Theodore Dreiser, James Branch Cabell, Eugene O'Neill, editors, Sherwood Anderson, et al.
New York: The American Spectator, Inc, 1933. Newspaper. 4p. broadsheet newspaper folded to 8.75x11.25 inches (causing a split in one fold). lightly-toned otherwise good. Dreiser attempted to steer the paper to the left but was stymied by Nathan and Boyd who eventually left the paper after it became a bore and a strain. The paper was anti-fascist (the paper warned against Hitler and the Nazis early-on) and leaned left as much as Dreiser could accomplish. This issue is more of a collection of reviews from other sources. (Inventory #: 177575)
$20.00 add to cart or Buy Direct from Bolerium Books
Share this item