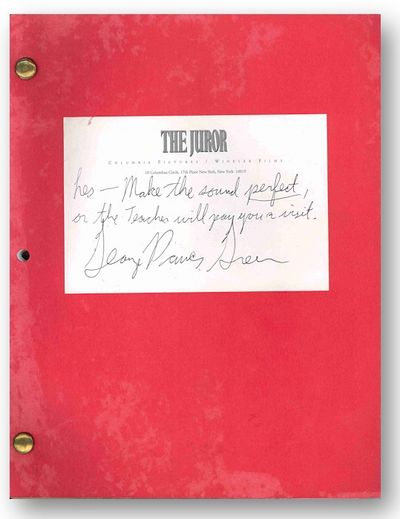 by Green, George Dawes [source work & screenwriter], and Ted Tally [screenwriter]
New York: Columbia Pictures, 1995. [9],119 leaves plus many, many lettered inserts. Quarto. Photomechanically reproduced typescript, printed on rectos only of a rainbow of variously colored stocks. Bradbound in wrappers with production company label. Upper wrapper a bit flecked, ink name and a few annotations (see below), otherwise a very good copy. A very interesting and substantially revised draft of this adaptation of Green's novel, incorporating several stages of a re-write by Green of Tally's script, identified and dated by a succession of dated title leaves with the revises identified by date, corresponding to an extraordinary array of dated revises comprising just short of the entirety of the text. This copy bears several ownership signatures (as well as identifiers of the revisions as for him in an unknown hand), and scattered notes of sound mixer Les Lazarowitz, who though uncredited by IMDB, clearly had a role at some point in the production: this copy bears Green's presentation inscription to him: "Les - Make the sound perfect, or the Teacher will pay you a visit. George Dawes Green." Brian Gibson directed the February 1996 release, which starred Alec Baldwin (as Teacher), Demi Moore, Anne Heche, James Gandolfini, et al. Tally, an Obie Award winning dramatist as well as screenwriter, whose scripts for THE SILENCE OF THE LAMBS and ALL THE PRETTY HORSES won an array of awards and nominations, received final screen credit. (Inventory #: WRCLIT68986)
$450.00 add to cart or Buy Direct from
William Reese Co. - Literature
Share this item

THE SHOW-OFF A NOVEL ... FROM THE PLAY BY GEORGE KELLY

THE LESSONS OF HISTORY COMMENCEMENT ADDRESS DELIVERED AT THE UNIVERSITY OF MASSACHUSETTS ...

Martha's Vineyard : The Indian Hill Press , 1998
(click for more details about THE LESSONS OF HISTORY COMMENCEMENT ADDRESS DELIVERED AT THE UNIVERSITY OF MASSACHUSETTS ...)
View all from this seller>