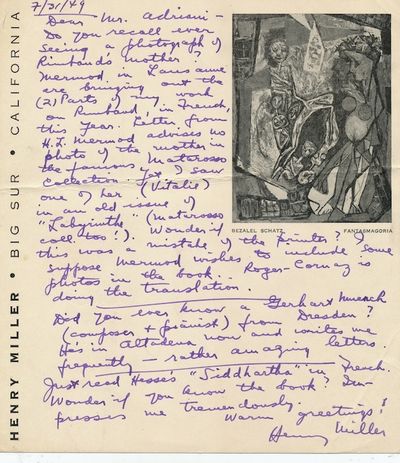 by MILLER, HENRY
To Bruno Adriani, Miller mentions French author Arthur Rimbaud and Hermann Hesse's classic, "Siddhartha." "Do you recall ever seeing a photograph of Rimbaud's mother? Mermod in Lausanne are bringing out the (2) parts of my work on Rimbaud in French, this year. Letter from H. L. Mermod advises no photo of the mother in the famous Matarosso Collection. Yet I saw one of her (Vitalie) in an old issue of 'Labyrinthe' (Mastarosso Coll too!). Wonder if this was a mistake of the printer? I suppose Mermod wishes to include some photos in the book. Roger Cornaz is doing the translation. Did you ever know Gerhart Muench (composer & pianist) from Dresden? He's in Altadema now and invites me frequently - rather amazing letters. Just read Hesse's 'Siddhartha' in French...Depresses me tremendously....." He signs, "Henry Miller." Bruno Adriani (born August 18, 1881 in Werne , Germany , January 7, 1971 in Carmel-by-the-Sea ) was a German-American jurist, art historian and patron Adriani was married to the American painter Sadie Adriani. They emigrated at the end of 1930 to Geneva and at the end of 1936 the couple moved to the USA, where they finally settled in Carmel-by-the-Sea in California in the autumn of 1941. In the early 1960s Adriani donated her art collection as a "Bruno & Sadie Adriani Collection" to the Fine Arts Museum of San Francisco , including a still life by Vincent van Gogh and Claude Monet a Seine landscape. (Inventory #: 2415)
$1,875.00 add to cart or Buy Direct from
Schulson Autographs
Share this item

by SCHULZ, CHARLES and TRUDEAU, GARY