Every Man His Own Broker: Or, A Guide to the Stock-Exchange.. 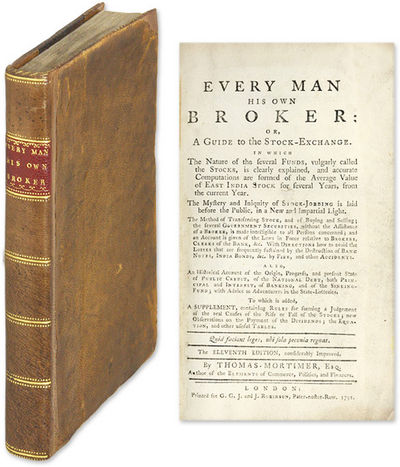 by Mortimer, Thomas
1791. London, 1791. 11th ed.. London, 1791. 11th ed. Every Man His Own Broker: A Popular Eighteenth-Century English Handbook Mortimer, Thomas [1730-1810]. Every Man His Own Broker: Or, A Guide to the Stock-Exchange. In Which the Nature of Several Funds, Vulgarly Called the Stocks Is Clearly Explained, And Accurate Computations are Formed of the Average Value of East India Stock for Several Years, From the Current Year. The Mystery and Iniquity of Stock-Jobbing is Laid Before the Public, In a New and Impartial Light. The Method of Transferring Stock, And of Buying and Selling; The Several Government Securities, Without the Assistance of a Broker, Is Made Intelligible to All Persons Concerned; And an Account is Given of the Laws in Force Relative to Brokers, Clerks of the Bank, &c. With Directions How to Avoid the Losses that are Frequently Sustained by the Destruction of Bank Notes, India Bonds, &c. By Fire, And Other Accidents. Also, An Historical Account of the Origin, Progress, And Present State of Public Credit, Of the National Debt, Both Principal and Interest, Of Banking, And of the Sinking-Fund; With Advice to Adventurers in the State-Lotteries. To Which is Added, A Supplement, Containing Rules for Forming a Judgment of the Real Causes of the Rise or Fall of the Stocks; New Observations on the Payment of the Dividends; The Equation, And Other Useful Tables. London: Printed for G.G.J. and J. Robinson, 1791. xxiv, 263, [1] pp. Engraved fold-out "Table of Equation." 12mo (6-7/8" x 4-1/8"). Contemporary sheep, carefully rebacked and re-cornered, lettering piece and gilt fillets to spines, hinges mended, negligible toning to text. Faint pencil marks to margins in some places, interior otherwise clean. An excellent copy. $1,000. * Later edition, "Considerably Improved." This popular guide was first published in 1761 and was later translated into German, Dutch, French and Italian. It appeared at a time when Great Britain was codifying its position as the most sophisticated commercial empire in the world. At the time of the eleventh edition stock in the East India Company held an allure comparable to shares in internet start-ups in the mid-1990s. As his lengthy sub-title title suggests, Mortimer was critical of brokers and hostile toward speculators and jobbers. However, his detailed advice offers one of the best accounts of stock trading in the second half of the eightee. (Inventory #: 61321)
$1,000.00 add to cart or Buy Direct from
Lawbook Exchange
Share this item