WILD IN THE STREETS ... From an Original Screenplay by Robert Thom 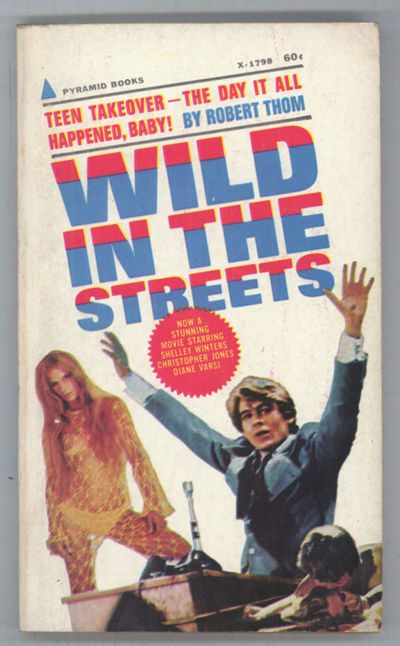 by Thom, Robert
New York: Pyramid Books, 1968. Small octavo, pictorial wrappers. First edition. Pyramid Books X1798. Novelization by Robert Thom based on his own script for the 1968 cult film directed by Barry Shear. "A rock star is co-opted by an ambitious politician but succeeds in outflanking his mentor to become President -- with unpleasant results. An over-the-top futuristic satire on pop culture and the ever widening generation gap, it bears some slight similarity to the British film (and novelization) Privilege." - Pringle, The Ultimate Guide to Science Fiction, second edition (1995), p. 421. The youth take over the United States after people fourteen and older get the vote and cooly confident millionaire pop singer Max Frost is elected President at twenty-two. The old "spoilers" are hauled away to "mercy camps" where they are "neutralized" forever on killing or stupefying LSD trips. The youth revolution sweeps the world, but Thom closes his novel with reminders about the corruptive workings of power and the eternal balances that inevitably reassert themselves. As one of the sub-teens oppressed by their elders suggests to a fellow sufferer: "we oughta really put everyone over ten out of business." Berger, Science Fiction and the New Dark Age, pp. 135-8. Sargent, British and American Utopian Literature, 1516-1985, p. 315. Reginald 14055. Front cover just a bit dusty, else a fine, unread copy. Scarce thus. (#142801) (Inventory #: 142801)
$75.00 add to cart or Buy Direct from L.W. Currey
Share this item
L.W. Currey Inc.
Offered by