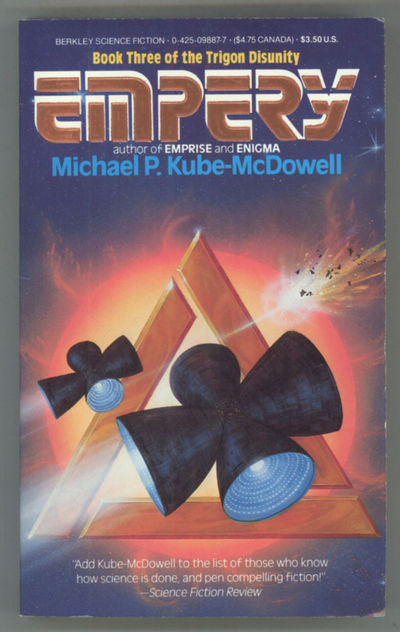 by Kube-McDowell, Michael P.
New York: Berkley Books, 1987. Small octavo, pictorial wrappers. First edition. "His first published sf story, "The Inevitable Conclusion" for AMAZING in August 1979, also marked the inception of his Trigon Disunity sequence, comprising his first three novels -- EMPRISE (1985), ENIGMA (1986) and EMPERY (1987) -- along with other tales like "Antithesis" (February 1980 AMAZING). Though failing to rise above some of the less attractive assumptions held by many sf writers (Americans in particular) about the comical incompetence of politicians compared to the world-changing nerve of scientific entrepreneurs, the series triumphs through the expansive exuberance of its premise: that an earlier wave of humanity had long ago colonized the Galaxy, and that the apparent aliens whose probing has reawakened contemporary humanity's interest in the stars -- and revitalized a decaying planet -- are in fact not forerunners but our own cousins; the final volume moves, less convincingly, into a vision of the human species melding its differences through a form of communion." - John Clute, SFE (online). A fine copy. (#142789) (Inventory #: 142789)
$25.00 add to cart or Buy Direct from L.W. Currey
Share this item
L.W. Currey Inc.
Offered by