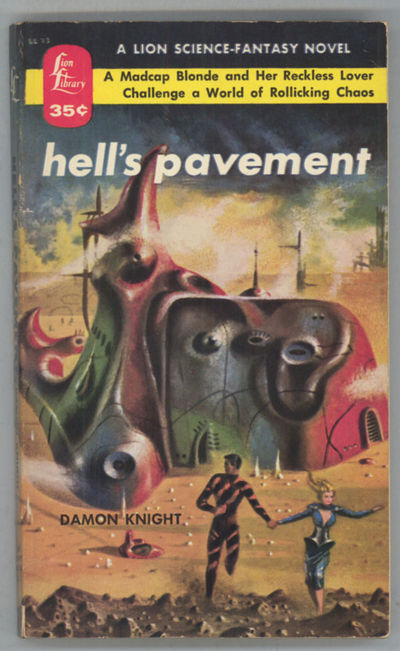 by Knight, Damon
New York: Lion Books, 1955. Small octavo, pictorial wrappers. First edition. Lion Books LL13. "Novelist-critic Damon Knight's HELL'S PAVEMENT gives us a composite picture of the fears of those times [America in the two decades following World War II], his book mirroring Pohl, Kornbluth, and Huxley and also anticipating Burgess's A CLOCKWORK ORANGE. In Knight's story, an 'analogue machine,' originally used to suppress the antisocial behavior of misfits, eventually becomes the tool of an American mercantile tyranny ... In time commercial conglomerates dissolve the nation, partition it among themselves, and make analogue treatments mandatory for all -- to promote sales ... However, though HELL'S PAVEMENT borrows heavily from novels one has read before, it does honestly represent a possibility that has alarmed many: that commerce, using the machinery of technology and the theory of behavioral science, is a threat to human liberty." - Berger, Science Fiction and the New Dark Age, pp. 121-2. Knight's first book, reissued as THE ANALOGUE MEN (1962). Anatomy of Wonder (2004) II-608. Sargent, British and American Utopian Literature, 1516-1985, p. 256. Survey of Science Fiction Literature I, pp. 48-52. Spine lean, rear cover creased, a bright, good copy. (#142780) (Inventory #: 142780)
$25.00 add to cart or Buy Direct from L.W. Currey
Share this item
L.W. Currey Inc.
Offered by