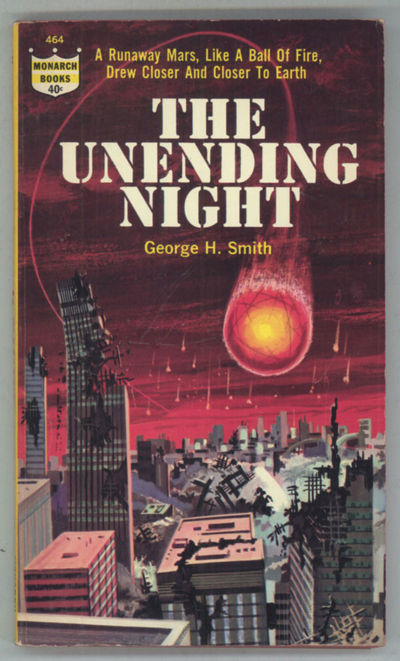 by Smith, George H.
Derby, Connecticut: Monarch Books, 1964. Small octavo, pictorial wrappers. First edition. Monarch Books 464. An international corporation, Unlimited Power, builds two enormous thermonuclear reactors using new, untested technology, one on the overpopulated Earth and the other on newly colonized Mars. A runaway chain reaction in the power plant on Mars disrupts its orbit and sets the planet on a collision course with Earth. Pieces of the shattered Martian moons strike the Earth -- causing fires, tidal waves and earthquakes -- and Mars looms in the sky, three times the size of Earth's moon. Meanwhile, Earth's secret masters plan to save the human elite in subterranean shelters, allow the masses to perish on the planet's surface, and create a new world order. One man stands in their way, a man with a plan to prevent the collision of the two planets and save all of the people who have survived so far. Will his plan work? Cover art by Ralph Brillhart. A fine, unread copy. (#142800) (Inventory #: 142800)
$45.00 add to cart or Buy Direct from L.W. Currey
Share this item
L.W. Currey Inc.
Offered by