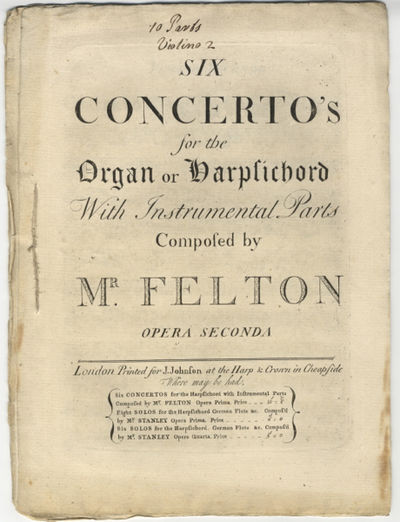 Title slightly dusty. Lacking parts for Violin I, Flutes I and II, Oboe I, Horns I and II and solo keyboard.

"In [Burney's] Account of the Musical Performances ... in Commemoration of Handel (London, 1785/R) he related an anecdote about Felton's endeavours to persuade Handel to subscribe to his op.2 concertos through the violinist Abraham Brown; Handel started up angrily and said: 'A parson make concerto? Why he no make sarmon?'. Handel's name did, however, appear on the subscription list to Felton's op.1 concertos. Felton is chiefly known as a prolific composer of organ and harpsichord concertos; Burney pronounced that he 'produced two concertos out of three sets that were thought worthy of playing in London'. Despite this, Felton's concertos were widely acquired by music society libraries and private collectors, and his music frequently appeared in 18th-century domestic manuscript anthologies (see Harley)." Gerald Gifford in Grove Music Online. (Inventory #: 22216)
$440.00 add to cart or Buy Direct from
J. & J. Lubrano Music Antiquarians
Share this item