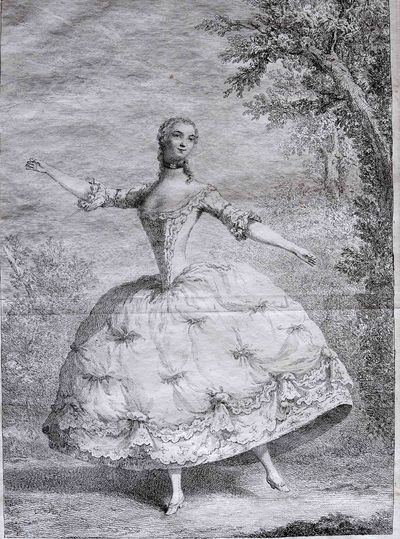 Anonymous engraving (English? French? Ca. 1750) probably after a lost painting by Carlotta Amigoni with the face probably taken from a medal of Joanna Auretti. The subject of the print is either Anne or Janneton Auretti.

The Aurettis--Anne and Janneton (probably sisters) --were important dancers in England in the mid-1740s-1750s. Originally from Provence, they came to London where Anne created a sensation. Many dances are named after Anne, although some of them may have been created by Janneton.* As one source relates,

Both the Aurettis were capable in the then-current school of Mlle Camargo, but they appeared very often also in character dances and in national dances of several countries (Highfill and Burnim, 176). Published anecdotes mentioning Anne and Janneton Auretti give some semblance of a chronology to their careers in London: 1741-1742: Anne danced for the first time at GC October 23, 1742 with a girl who was presumably her younger sister Janette. Throughout the 1741-42 season, the two girls were frequent dancers with the CG company (Highfill and Burnim, 176-7). 1745: According to another source, "In 1745, in consequence of the rebellion in Scotland and the popular prejudice against the performers, who were mostly Roman Catholics, the opera-house was shut. Next year it opened with an opera by Gluck, then a very young composer, and new dances by [Anne] Auretti and the charming Violette** which, we are told, were more admired than the musi (Festival). 1746-1748: The French dancer Anne Auretti (fl. 1742-54) performed dances variously titled "Les Caractères de la Danse" or "Les Caprices de la Danse" at Drury Lane between 1746-1748. She was joined by her sister Janneton (Brooks, 169). 1747:

Theatrical impresario Tate Williamson, writing in his Memoirs of 1790, notes that at Drury Lane in 1747, Madam Auretti ("in serious style") was one of several "capital dancers" that season and was held in "great estimation . . . Madame Auretti continued only the season following, when 2 her benefit was commanded by his Majesty George the after which she retired from the stage . . ." ("Auretti's Minuet"). 1749-1750: From 1749 through the mid-1750s, one or another danced in London and in David Garrick's company (Highfill and Burnim, 176-7).

Italian art historian Martina Manfredi, who writes about the artist who did the (now lost) painting of Auretti, Carlotta Amigoni, provides information that helps to identify details of the three engravings of Auretti. For example, three prints of Auretti (either Anne or Janneton) exist: one is certainly based a lost painting by Carlotta Amigoni; the other two are probably based on the same painting as well.

3. (Our engraving) La Celebre Auretti (Janneton Auretti?) by Anonymous (n.p., ca. 1750). Probably from the lost Amigoni painting with the face from a medal of Joanna Auretti (Manfredi). In the second and third engravings, the dancer's head faces left and her foot is extended to the left. In the first, the head faces right and the leg is extended to the right.

From V&A's online description of the Scotin (number 2) engraving: Mlle Auretti was an Italian dancer who appeared in London in the 1760s. Dancers wore variations on fashionable dress, and at this period the round hooped skirts had developed into ovals, which became very wide. This meant that the arms could not be dropped to the sides of the body and were usually held out above waist height, rather like wearing a ballet tutu. The panniers and stiffened bodice certainly restricted movement, but there was still considerable scope for fast, neat footwork, elegant carriage of the upper body and graceful arms.

Amsterdam : Caspar Commelin , 1664
(click for more details about QuæexstantMarcusZueriusBoxhornius Histories )
View all from this seller>