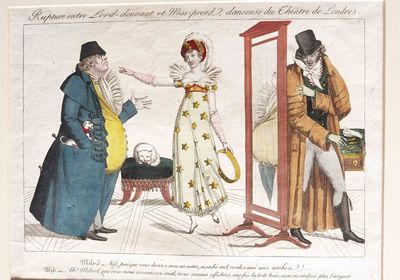 Satire: A bulky Englishman with a dog in his pocket is addressed by a dancer, while her lover hides behind a long mirror. This print is a generic satire pointed toward the wealthy, middle-aged English theater-going man who found delight in beautiful French dancers.

It may have echoes of the French opinion of James Duff or somebody like him. In 1815, James Duff, later Earl and Fourth Lord Fife, spent time in Paris and became one of the privileged wealthy foreigners to inhabit the opera boxes. He paid particular court to Lise Noblet, with the Morning Herald reporting, "There he would carry her shawl, hold her fan, run after her with her scent-bottle in his hand, admire the diamond necklace someone else had given her, or gaze in ecstacy at her pirouettes" (July 30, 1829, qtd. in Guest, The Romantic Ballet in England, 1972).

The artist is identified as Jean Baptiste Gautier (French publisher/printer and printmaker; fl. 1780 1820 ), who was known for his caricatures, decorative fans, calendars, and portraits of notables such as Louis XVIIII and Mme Talma. The British Museum notes that this print was listed in the Bibliographie de France on December 30, 1815 by Gauthier.