[Smith, Jessie Willcox - Magnum Opus] The Book of the Child 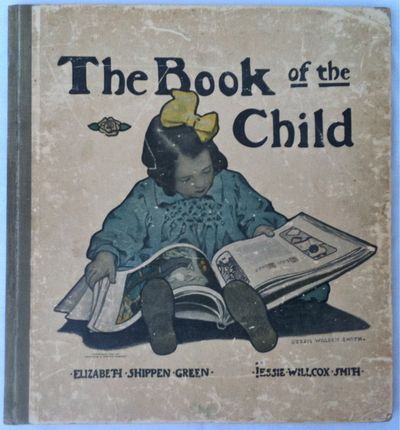 by Humphrey, Mabel
New York: Frederick A. Stokes Company, 1902. First edition. First edition. Large squarish folio. Original color tinted paper covered boards, beige cloth spine. Cover insert on front and back by Smith, seven full page color plates, three by Jessie Willcox Smith and four by Elizabeth Shippen Green. Six headpiece drawings in orange and black by Smith, six by Green. First and only edition (except for an English edition of lesser quality printed after this release) of what is universally considered Smith's greatest book, both in size and color and composition, produced in collaboration with Elizabeth Shippen Green at the starting point of both artist's graphic art prowess. The book is noteworthy on many accounts. It was the largest colorplate book for children issued in the United States (with a few minor exceptions), it was printed by the acclaimed and accomplished color process leader, Charles W. Beck, Jr., who would subsequently join with Smith on a number of other books. Finally, the book stands out as a highpoint in compositional genius, artfully combining the complementary skills of two leading illustrators of the period in large format book for children. (Inventory #: 1262)
$2,750.00 add to cart or Buy Direct from
Nudelman Rare Books
Share this item