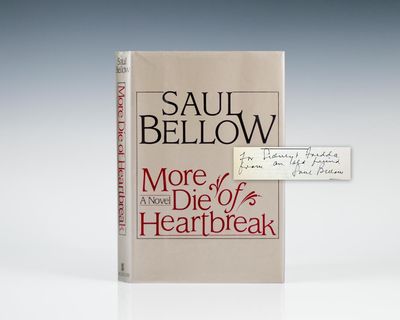 by Bellow, Saul
New York: William Morrow and Company, 1987. First edition of the author's tenth novel. Octavo, original half cloth. Inscribed by the author to fellow writer Sidney Hyman and his wife, "For Sidney and Fredda from an old friend Saul Bellow." Fine in a fine dust jacket. Hyman, a fellow Chicagoan is best know for his work, "The American President. "In More Die of Heartbreak we welcome back the calamitous wit of The Adventures of Augie March and Herzog The Nobel Prize, which Bellow won in 1976, was the cornerstone of a career that also included a Pulitzer Prize, three National Book Awards, a Presidential Medal and more honors than any other American writer" (New York Times). (Inventory #: 3138)
$500.00 add to cart or Buy Direct from
Raptis Rare Books
Share this item