Hair on a Cue Ball: The Hair-raising Adventures of a Hollywood Writer 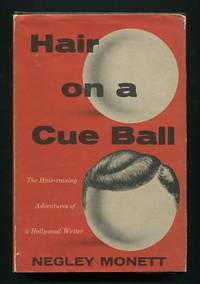 by Monett, Negley
New York: Exposition Press (A Banner Book). Very Good+ in Very Good dj. (c.1955). First Edition. Hardcover. [bumped and slightly cracked at bottom corner of front cover, one-time owner's ink signature on ffep, otherwise tight and clean with no significant wear; jacket lightly edgeworn, small tear at top right-hand corner of front panel, small horizontal scrape on spine]. "The real, unvarnished facts, the revealing story about hair, presented authentically in a humorous autobiography [in which] facts are blended with fancy" -- one of the "fancies," perhaps, being the author's bona fides as a "cinema, radio and TV writer," given that any credits he may have achieved in this line of work seem to have completely eluded all the standard reference sources. The rear-jacket blurb (presented in the form of two jokey and clearly fake newspaper articles) calls him a "notorious radio and TV writer [with] a long record having served time in the San Francisco News as a feature editor; in NBC and CBS in San Francisco as a writer-producer [and] in Hollywood as a writer-producer before waging a spectacular escape climaxed by a stretch as a hair-grower." Indeed, the "Hollywood Writer" subtitle notwithstanding, it's the last-named occupation that this book is exclusively concerned with: "through a mixup at a personnel consultant's office, [the author] goes to work for a large chain outfit offering special hair and scalp treatments; in a short time the reformed writer winds up running the Montreal office, and that is where the funfest begins. Between zany clients and zanier operators working for him, our hero finds himself in the middle of some really zany situations." (It's zany, got that?) Although he avers in his introduction that he's changed the names of individuals and of the company he worked for, he also lauds said company for having been successful with hair restoration or the cleanup of scalp disorders in "millions of cases." Finally, he hopes the reader will "look upon me as a reporter [who] has actually witnessed the story, the story of the growth of hair." . (Inventory #: 19166)
$20.00 add to cart Available from ReadInk
Share this item
ReadInk
Offered by

Six Plays by Rodgers and Hammerstein [Oklahoma!; Carousel; Allegro; South Pacific; The King and I; Me and Juliet]

New York : Random House , [1955]
(click for more details about Six Plays by Rodgers and Hammerstein [Oklahoma!; Carousel; Allegro; South Pacific; The King and I; Me and Juliet])
View all from this seller>