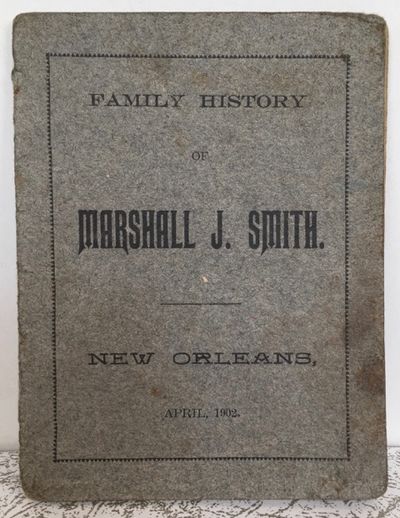 by Smith, Marshall J.
New Orleans, (LA): The author, 1902. First edition. 16mo. 14 pp. A native of Fauquier County, Virginia, born in 1824, Smith attended a private school in Baltimore and was appointed a midshipman in the U.S. Navy in 1841, eventually attending the Naval Academy in Annapolis, Maryland, to earn a commission. After serving in the Mexican War, he married and took his wife to Mobile, Alabama, where he began business, soon expanding to New Orleans. Following service in the Confederate army during the Civil War, he resumed his business career in New Orleans; he died in 1905. The first ten pages of the pamphlet describes Smith's ancestors in England and the United States. OCLC locates two copies (Virginia Historical Society; Allen County, Indiana, Public). Some foxing, a few passages marked in red, but a good serviceable copy of a scarce title. Original printed charcoal wrappers (soiled), stapled. (#5608). (Inventory #: 58906)
$225.00 add to cart or Buy Direct from
Bartleby's Books
Share this item

A NEW MAP OF ARKANSAS with its canals roads & distances

Philadelphia, [PA] : Published by Thomas, Cowperthwait & Co , 1850
(click for more details about A NEW MAP OF ARKANSAS with its canals roads & distances)

A NEW MAP OF THE UNITED STATES OF AMERICA

Philadelphia, [PA] : Published by Cowperthwait, Desilver & Butler , 1850
(click for more details about A NEW MAP OF THE UNITED STATES OF AMERICA)
View all from this seller>