THE LULL BEFORE DORKING 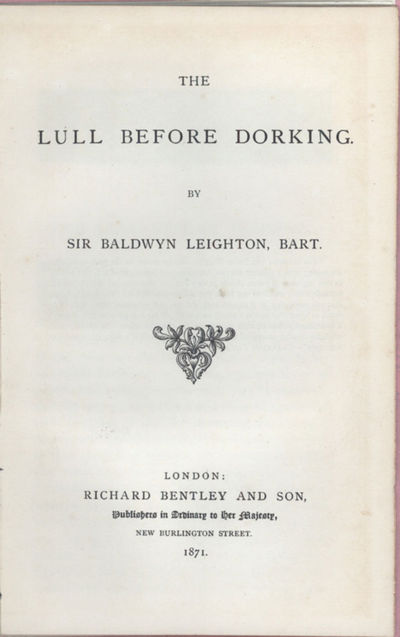 by Leighton, Sir Baldwyn
London: Richard Bentley and Son, 1871. Octavo, pp. [1-2] [1] 2-15 [16: blank], rebound in cloth without the original gray paper wrappers. First edition. One of the many responses to THE BATTLE OF DORKING, published the same year, which set the basic pattern for the admonitory future war story. Like most of them, as well as the original work, the present work was originally printed as a pamphlet. It is an essay with no pretense of storytelling, outlining what the author sees as the strengths and weaknesses of Britain and putting forward a program to correct the latter. Reportedly, Chesney's story so disturbed Richard Bentley, that he, with his friend Leighton, ran off 100 copies of Leighton's essay on military logistics to distribute to Parliament's "milk and water brigade." A "second edition" (i.e. printing) was published the same year. Locke, A Spectrum of Fantasy, Volume III, p. 51. Not in Topp. A fine copy. The first printing is very scarce. (#143396) (Inventory #: 143396)
$150.00 add to cart or Buy Direct from L.W. Currey
Share this item
L.W. Currey Inc.
Offered by